Jul 19, 2015 | Posted by Lady Vélo | Blog |
I was already thinking about going along to it, but when The Cycle Show asked me to report on last Saturday’s Red Hook Crit, I jumped at the chance. This was the London debut of what is regarded as the world’s premier track bike crit, with riders coming from all over the world. With the chance on offer to get very up close and personal with the action, there was no way I was going to miss that chance. 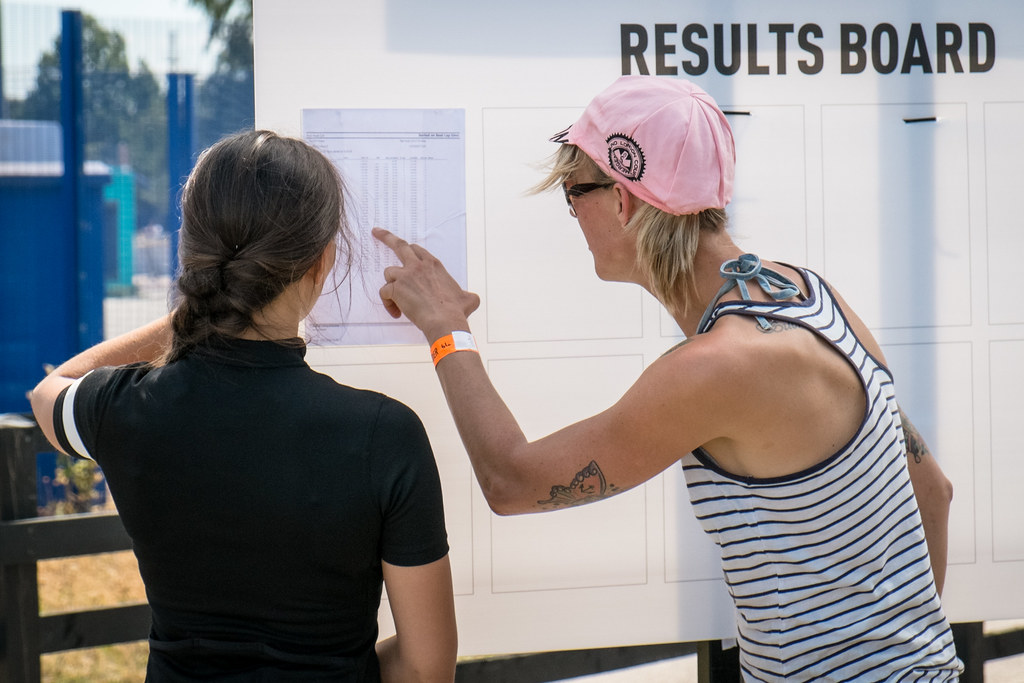 The event was created in 2008 by David Trimble, with the aim of combining the thrill of bare knuckle alleycat races with the organised mountain bike and track races he’d competed in. The first one took place in Brooklyn’s Red Hook district and 7 years later, the crit has become an international phenomenon, having been exported beyond NYC to Milan, Barcelona and now London – the fourth city to host the event.  For the London leg, the stage (or track) was set in Greenwich – right on my doorstep. As I’ve not quite mastered the art of cycling on water, I took the cable car over the Thames and the scenes I was greeted with were spectacular. Greenwich Peninsular had been completely transformed for a very intense day of racing: metal barriers and blocks snaked around the area creating the track, stands, stalls and team tents were dotted throughout, roads had been re-surfaced, the crowds were gathering and riders were EVERYWHERE. 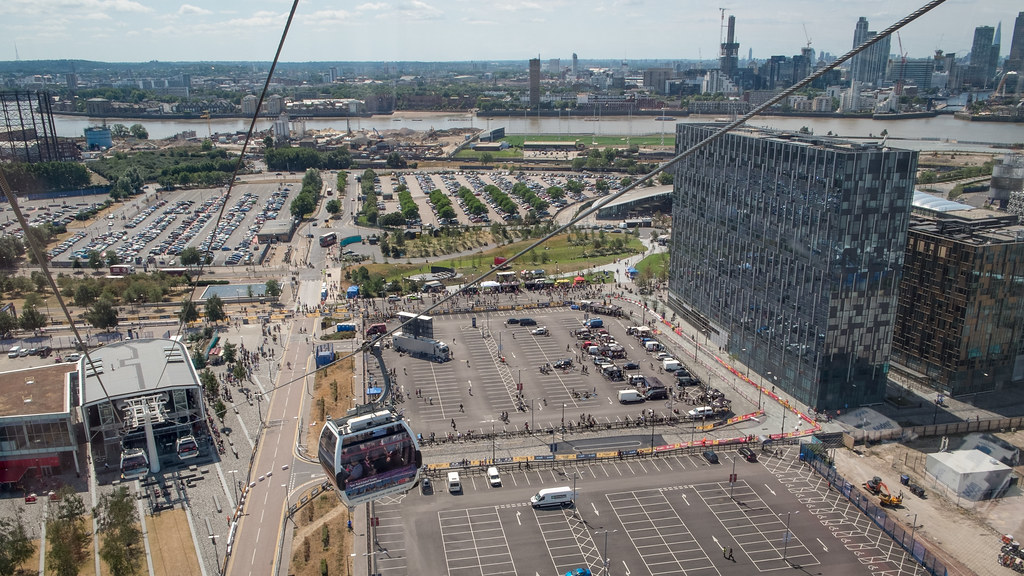 Touching down, my first port of call was parc fermé, which would be our filming base for the day. A happy advantage of having a press pass was having full access to this closed area. Being in the middle of the riders while they did warm up laps and prepped their bikes and gear was pretty cool. I was surrounded by men and women looking incredibly fly in their dazzling race suits, hardcore track and fixed gear bikes with incredible paint jobs, and all those tattoos… oh my god did I have envy for all of the above! 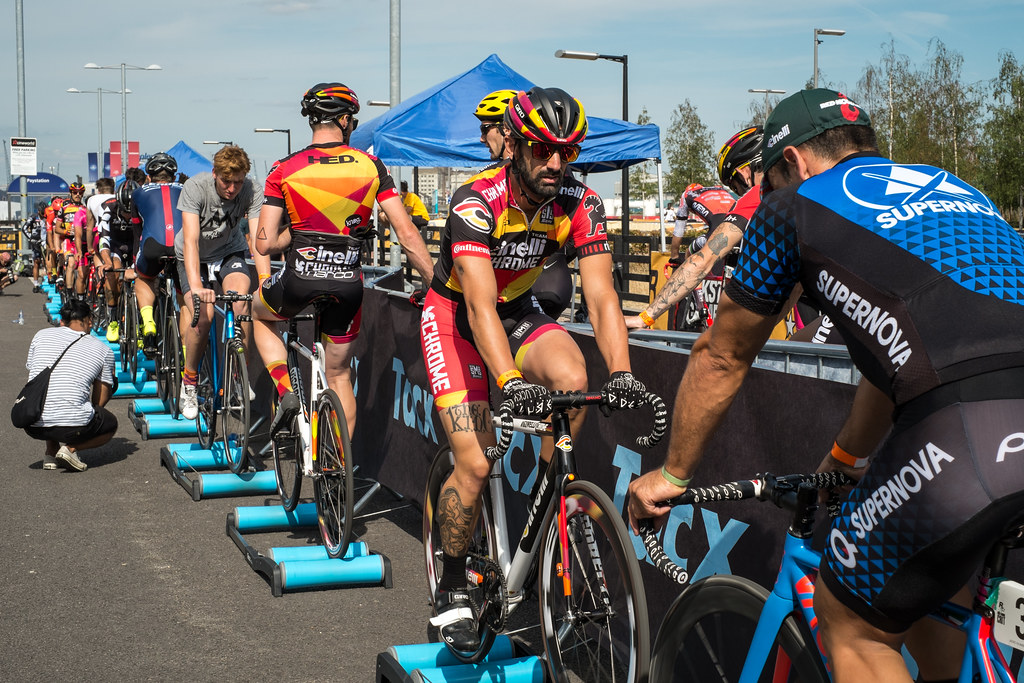 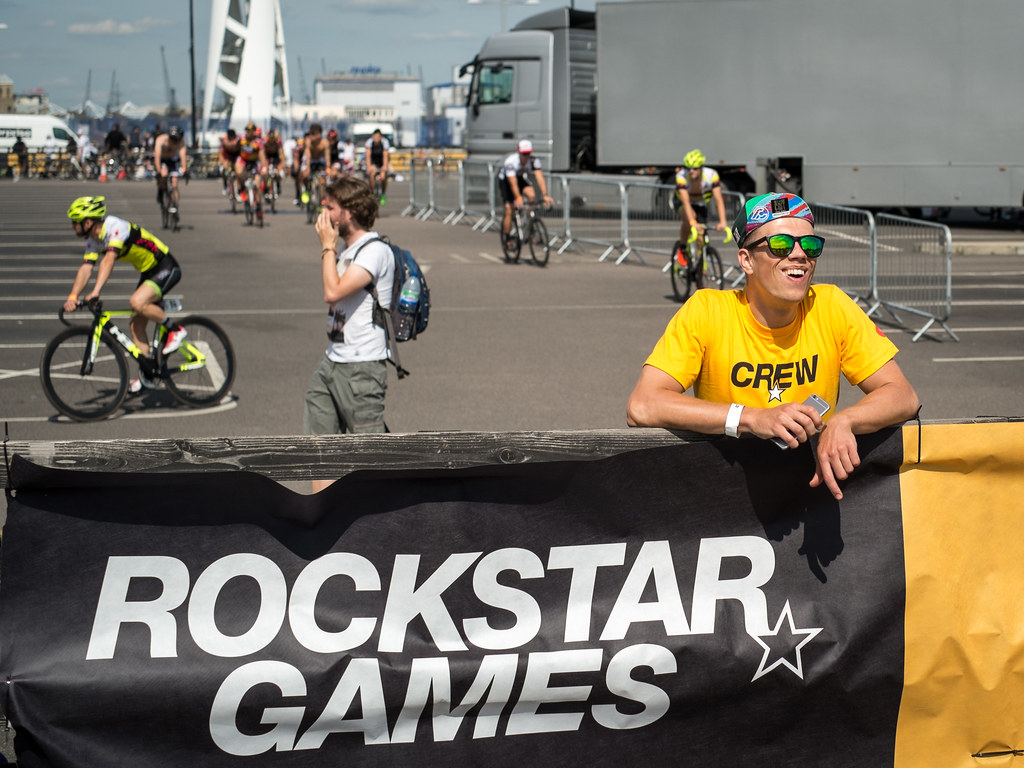 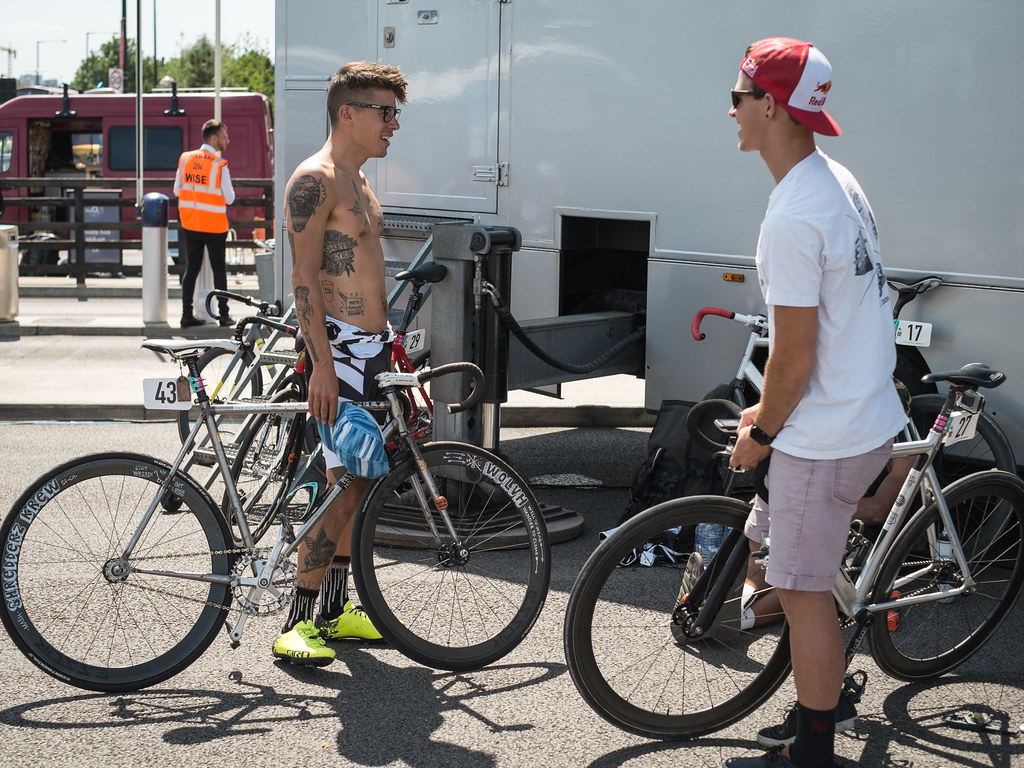 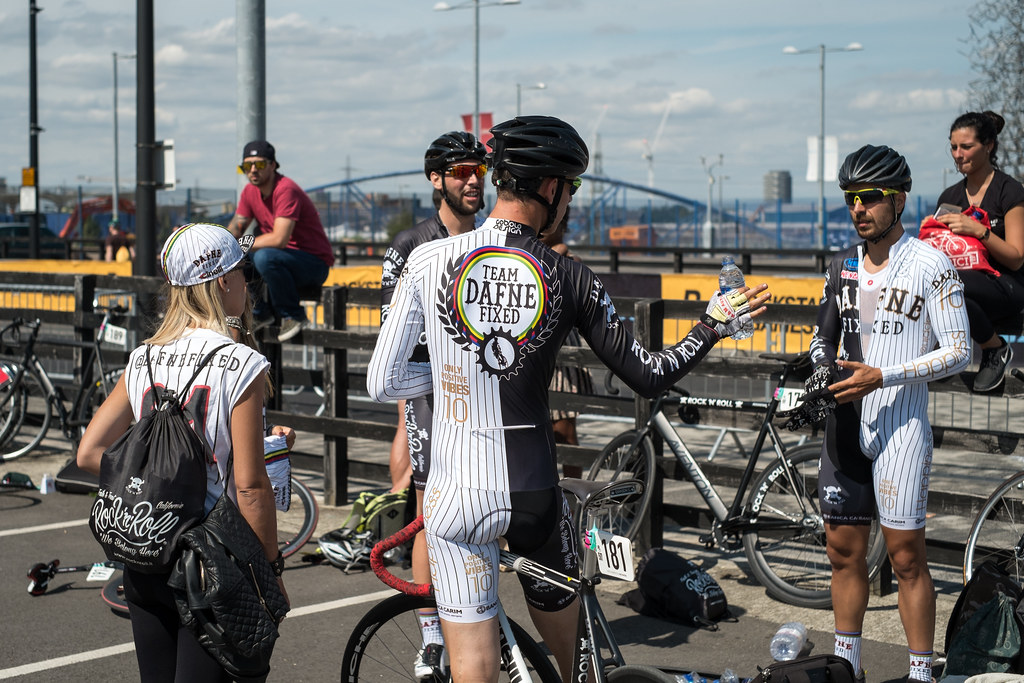 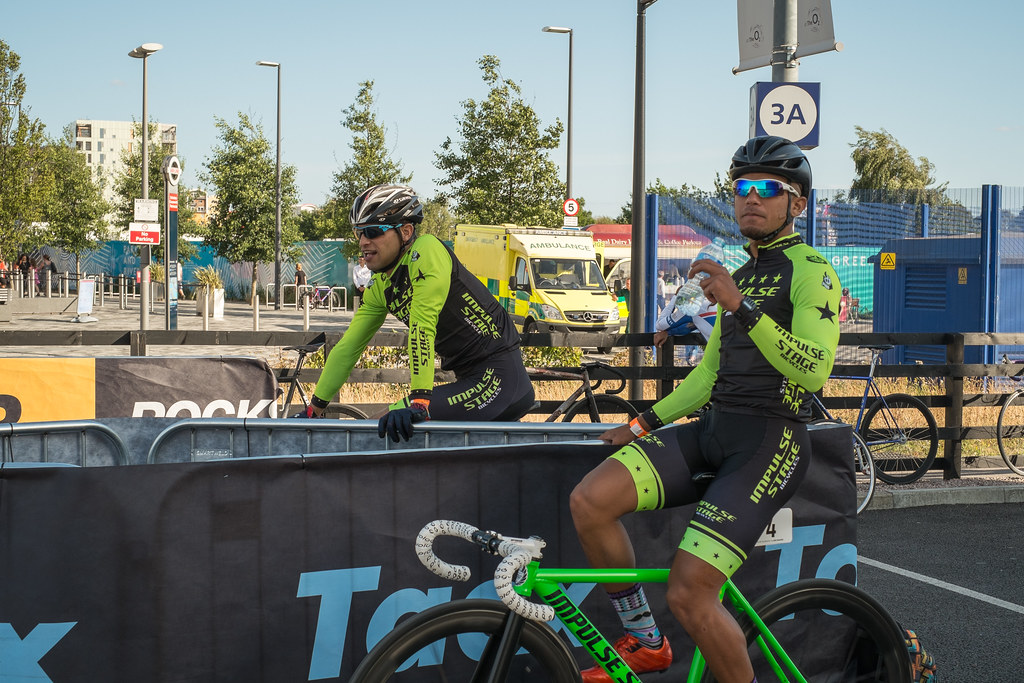 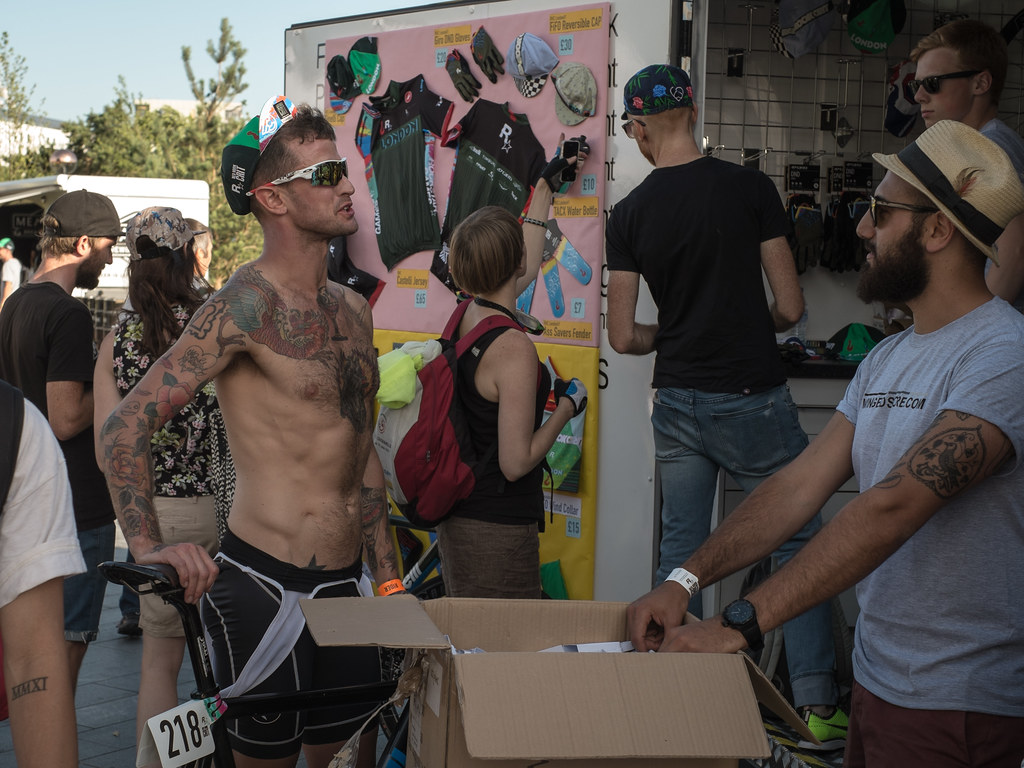 Individual riders, teams and faces I know from the world of cycling were there in abundance – some taking part for the first time ever in a crit, and some who were already seasoned legends on the scene. Catching up with and interviewing a few of them for the show was brilliant and at the same time, I was finding myself getting caught up in their excitement and the pure adrenalin buzz of it all. It’s a serious and focused event – you have to be when you’re riding that hard on such a challenging and tight course – but the atmosphere was incredibly chilled. Everyone was so friendly, welcoming and perhaps focusing on not only the race, but on having a very good time. 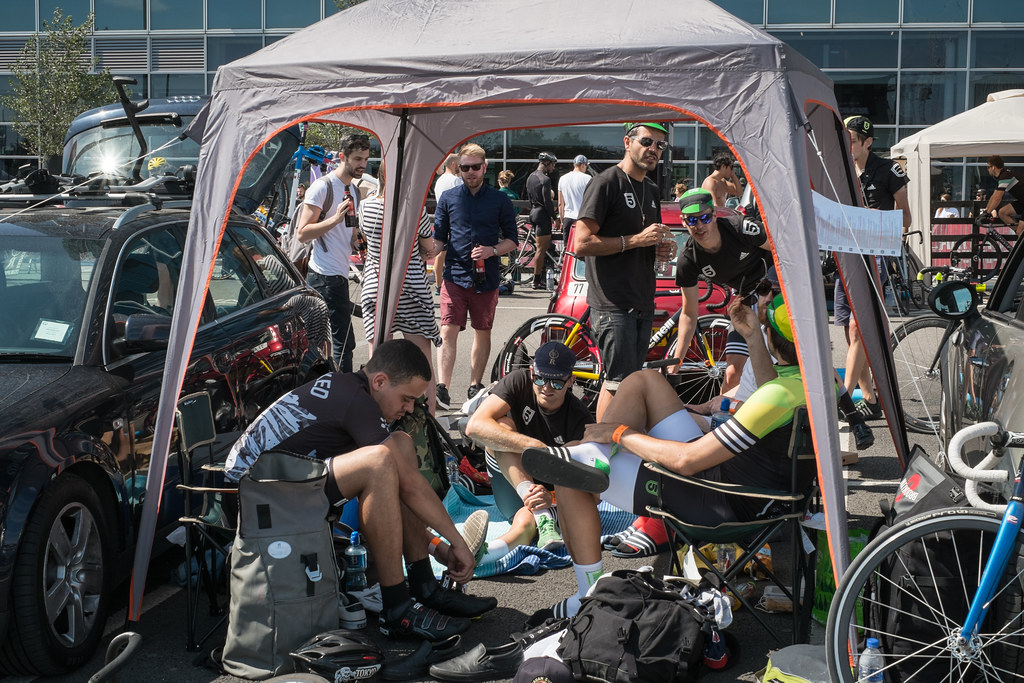 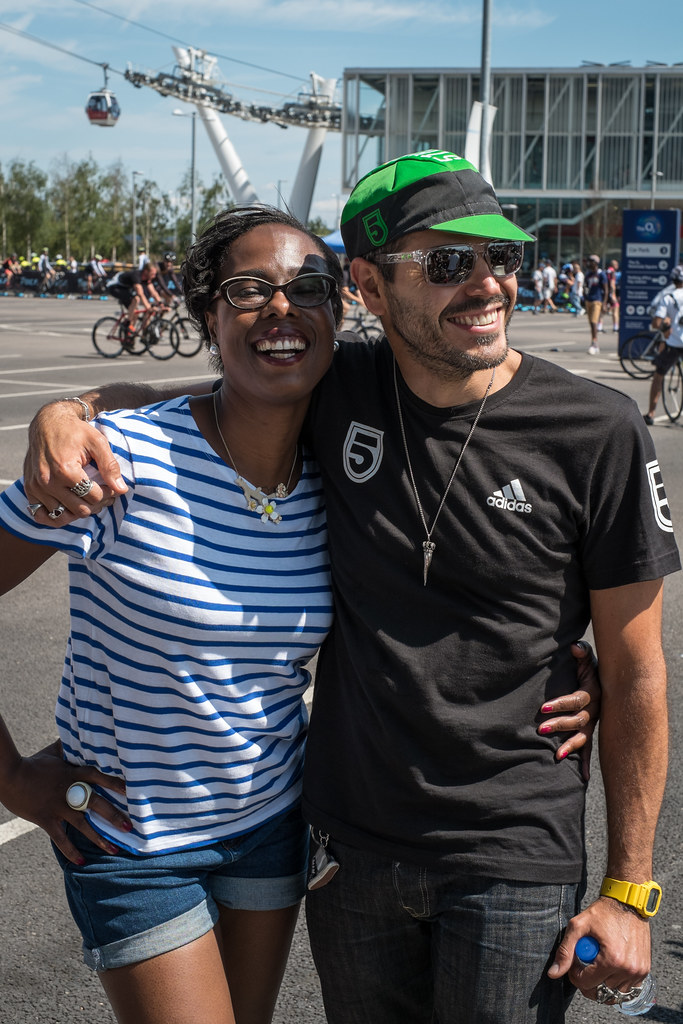 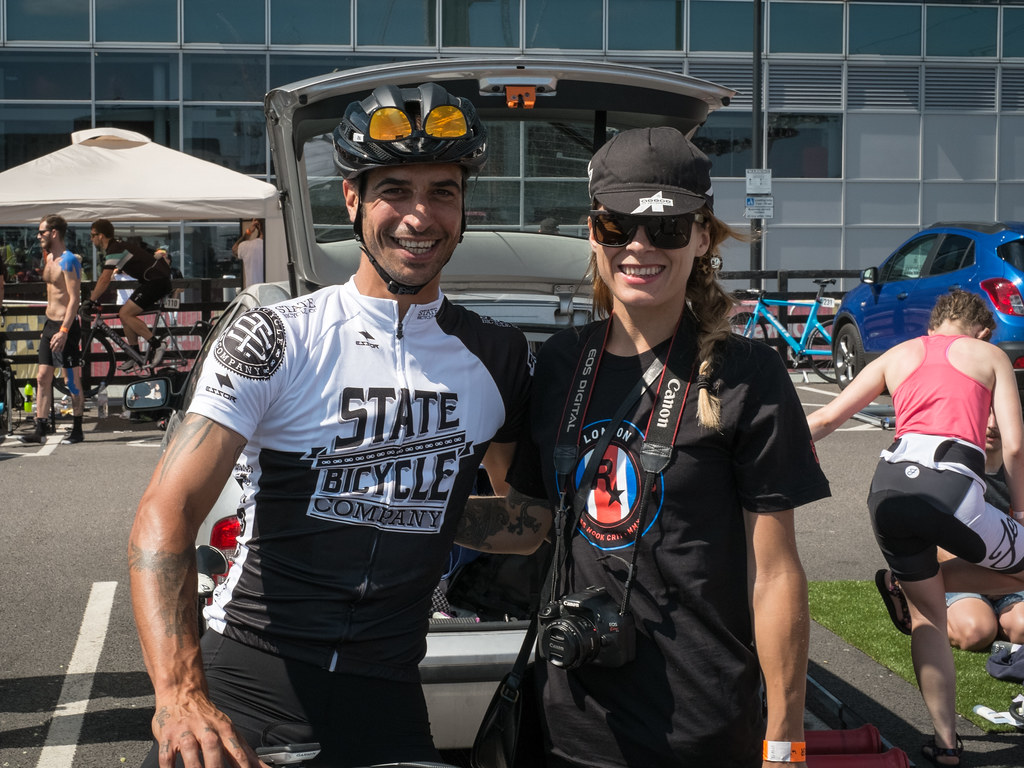 Throughout the afternoon the qualification rounds were going on, each lasting for 20 minutes. During these, you were able to get a very intense glimpse of what was to come later in the evening. There was the push and the pursuit to get the fastest times, to be in with a chance of making it through to the next round, and eventually to the main races. Even at this stage there were thrills and indeed spills… a few crashes had occurred in both the men’s and women’s qualifiers, resulting in neutralised sessions and some high emotions. Like I said, this is quite the course – the challenge of taking on the demanding tight laps and cycling in a pack of riders with no brakes isn’t exactly easy. Excellent bike handling skills are a must when taking part in an event like this. 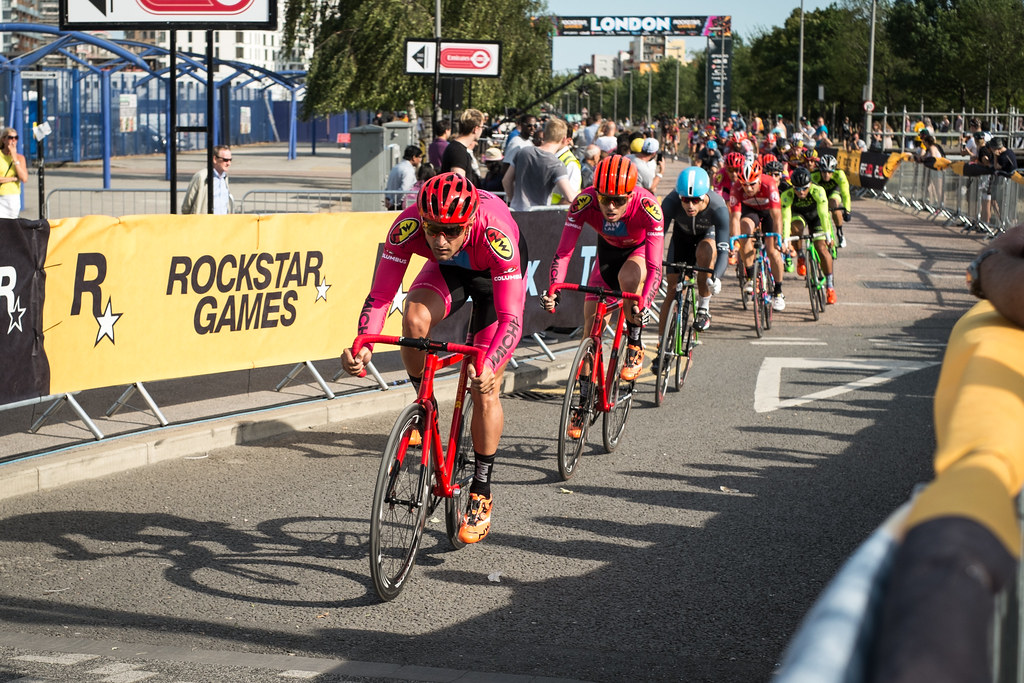 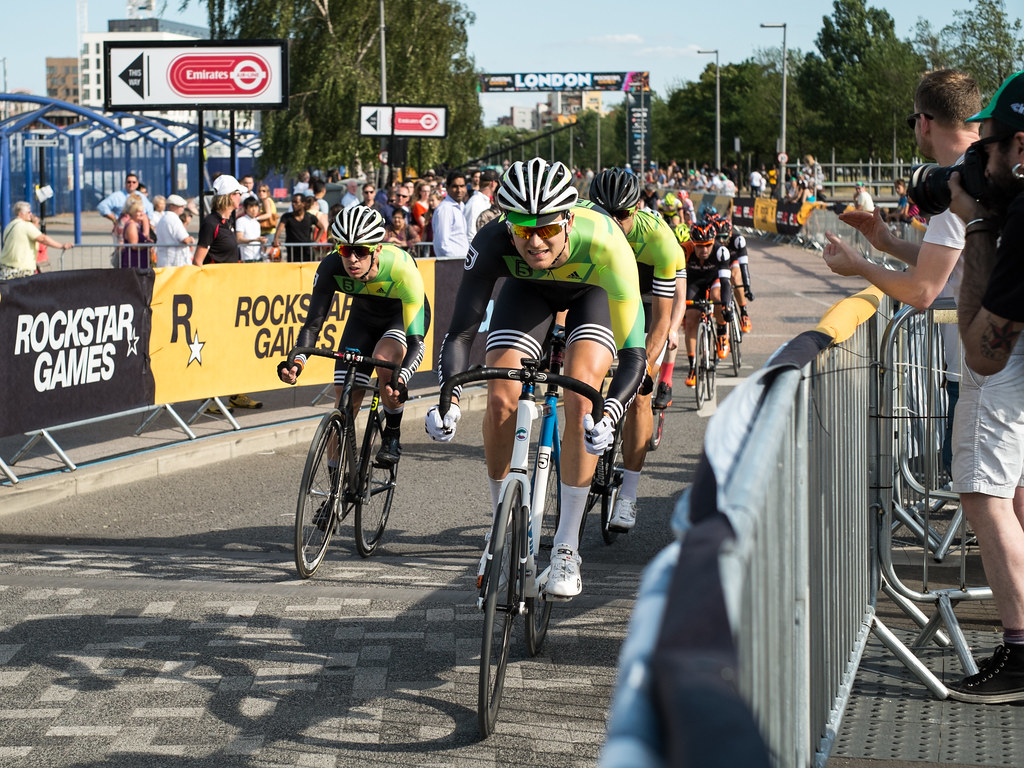 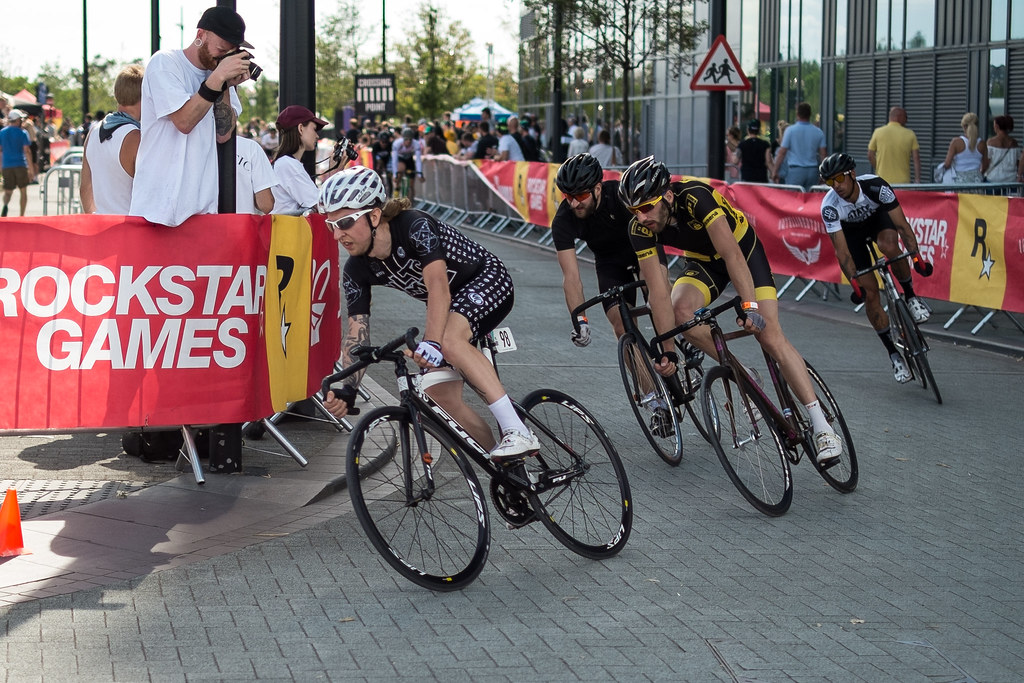 After the thrill of the qualifiers, the race I’d been looking forward to the most came up at 19:30 – the Women’s Criterium: 20 laps and 22.5km of pure racing. I was amongst those who had gotten through to the final while they were warming up, and once again could feel the adrenalin pulsing through the air. Having a chat with Juliet Elliot while she was on the rollers, and listening to her explain her journey into doing the crit & her excitement about it all was actually infectious for me. There was a part of me that was wishing I was doing it…  I could only dream of being anything close to these strong, hard and powerful women! For that night, watching it, cheering them on and speaking to the winner at the end would have to be enough for me… 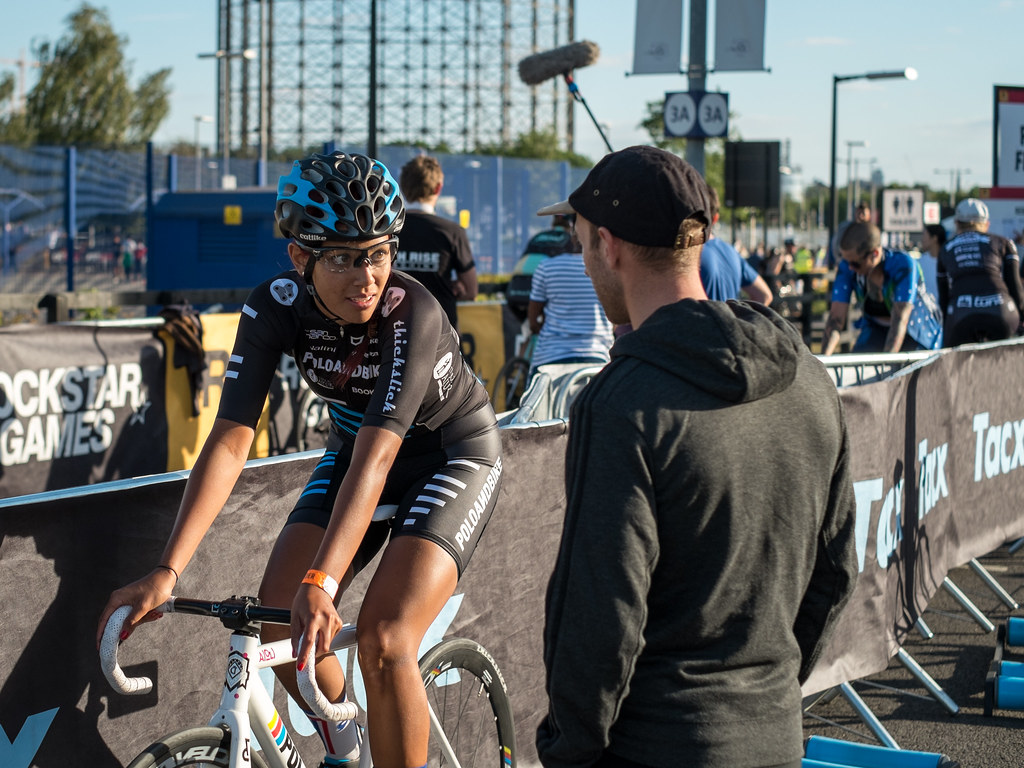 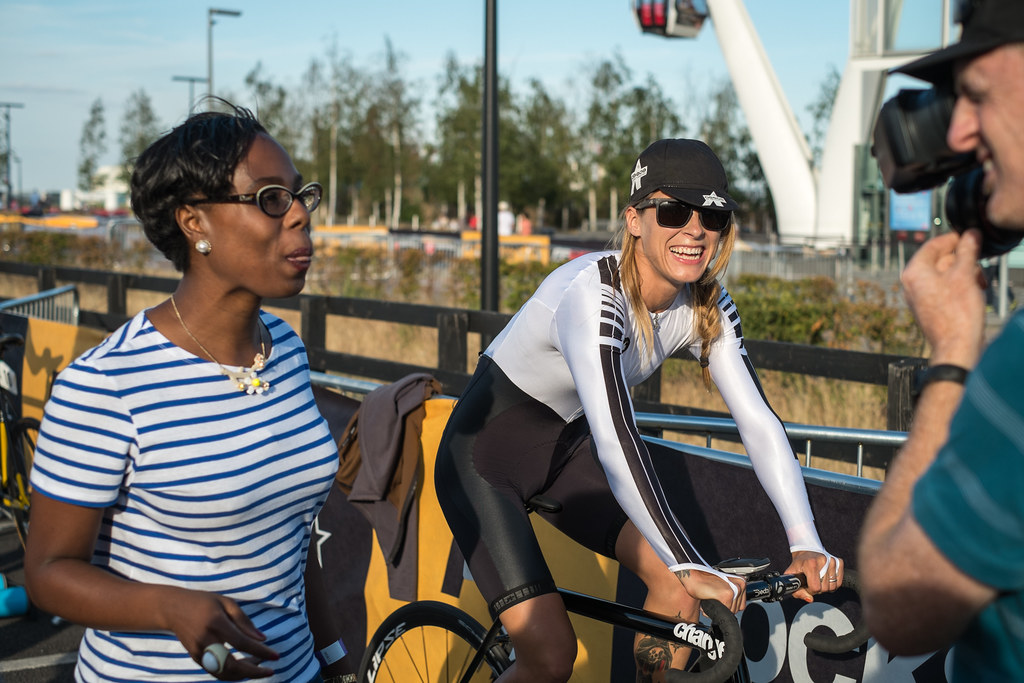 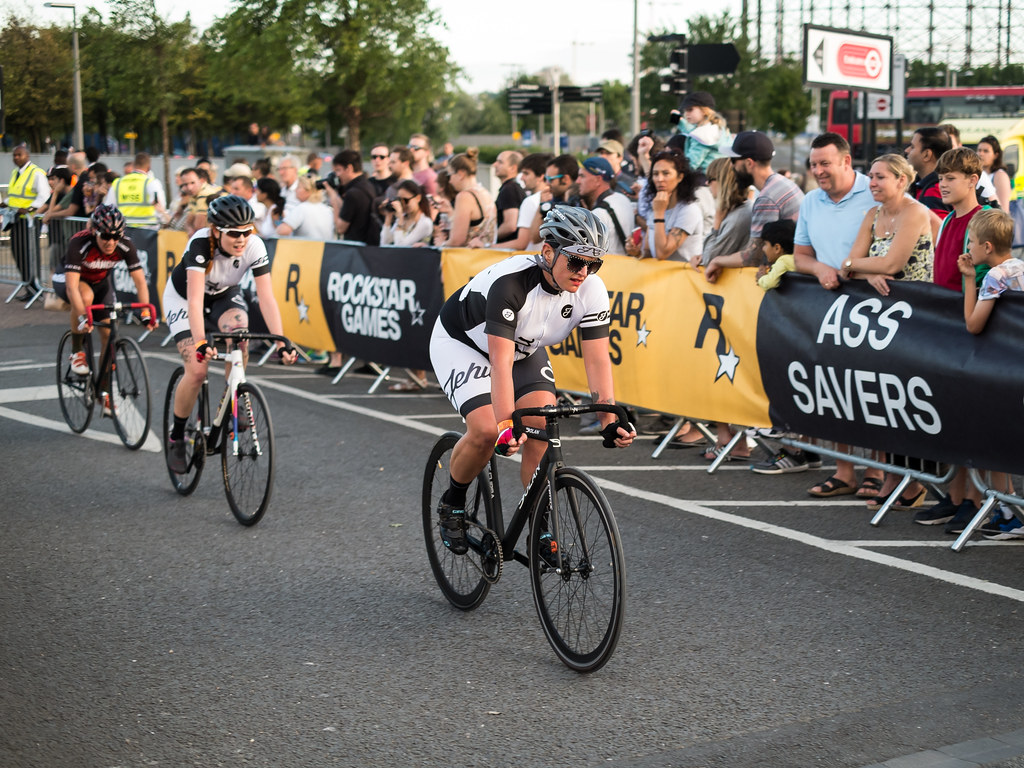 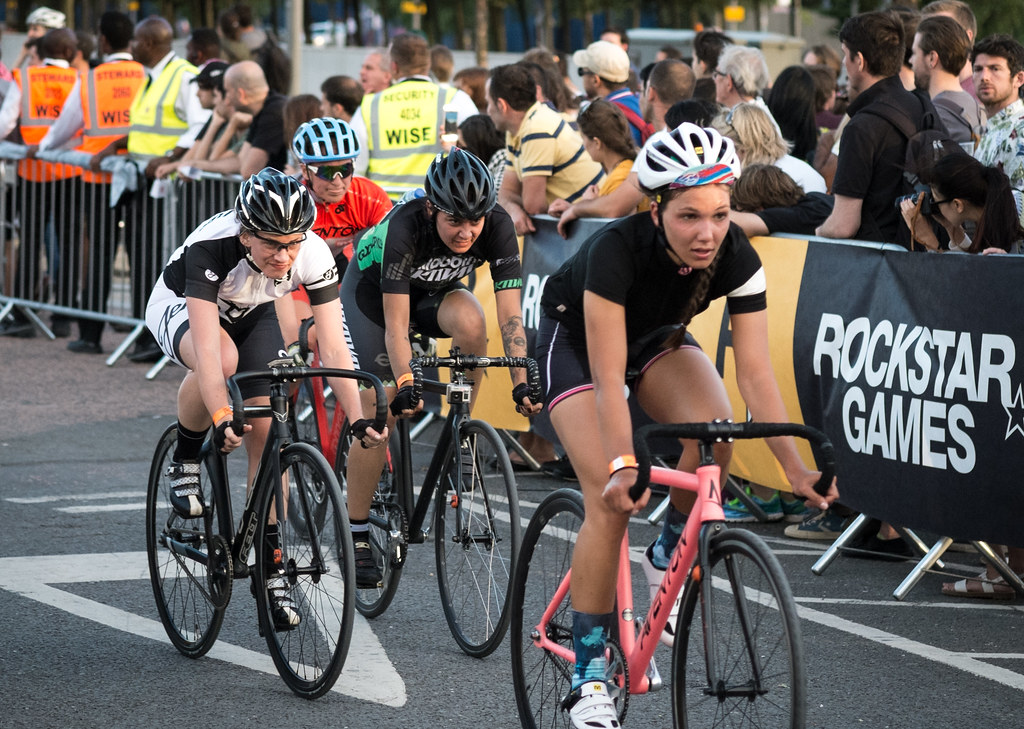 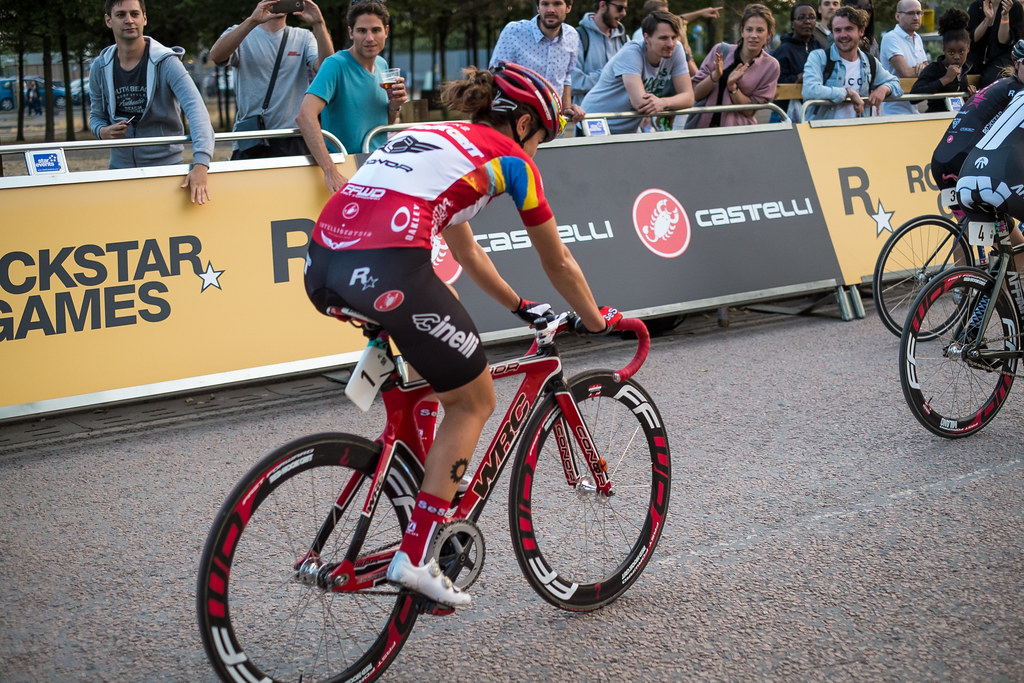 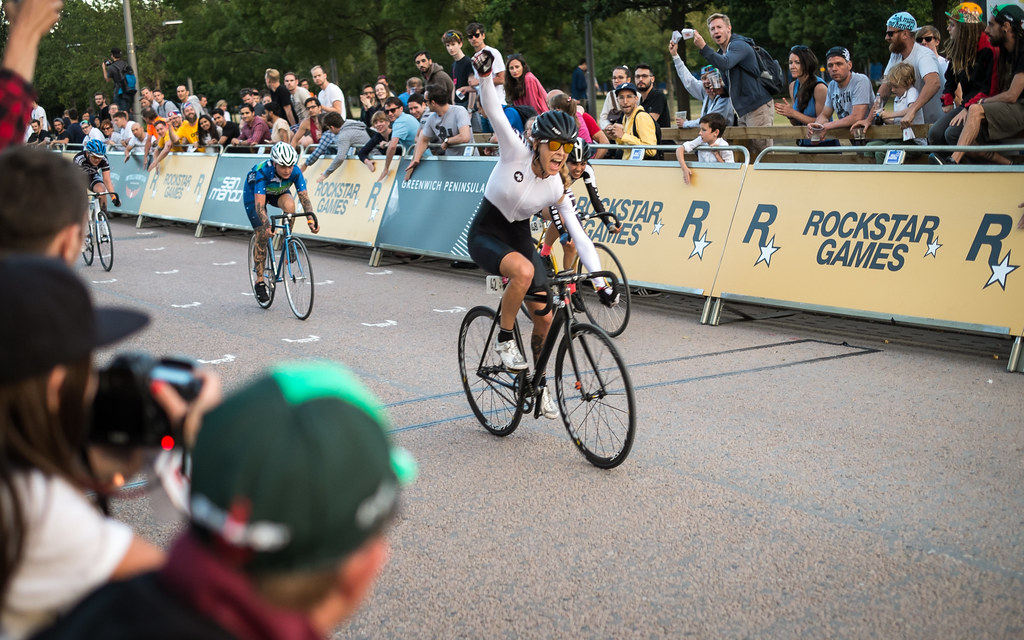 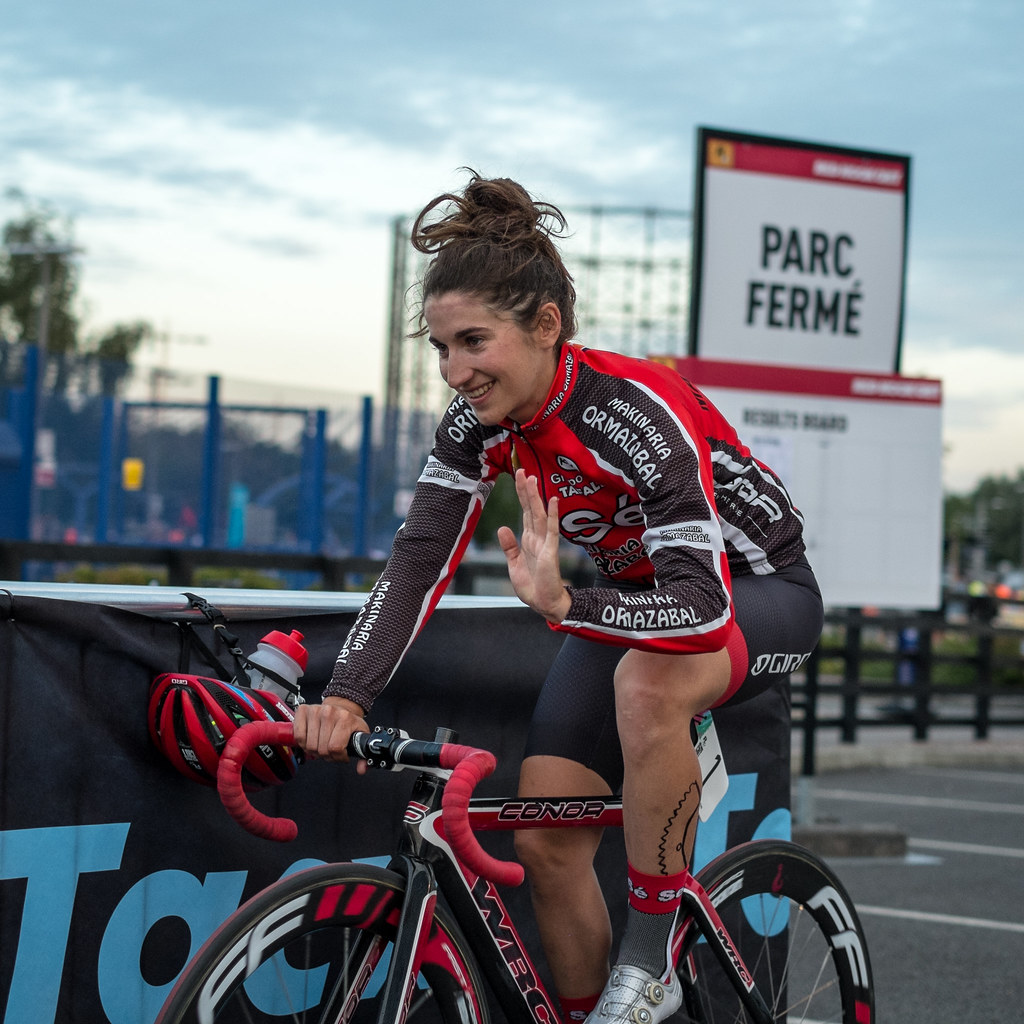 The Men’s Criterium was longer at 26 laps and 30km, and was also a thrill to watch. It was another full on session of speed, agility and skill to take in and enjoy… 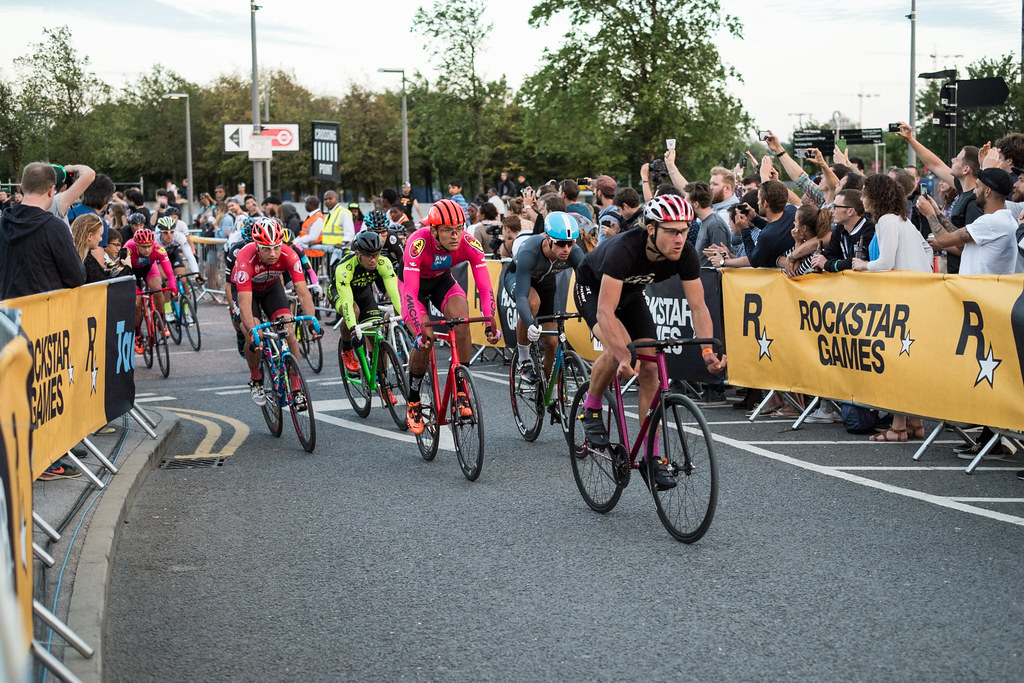 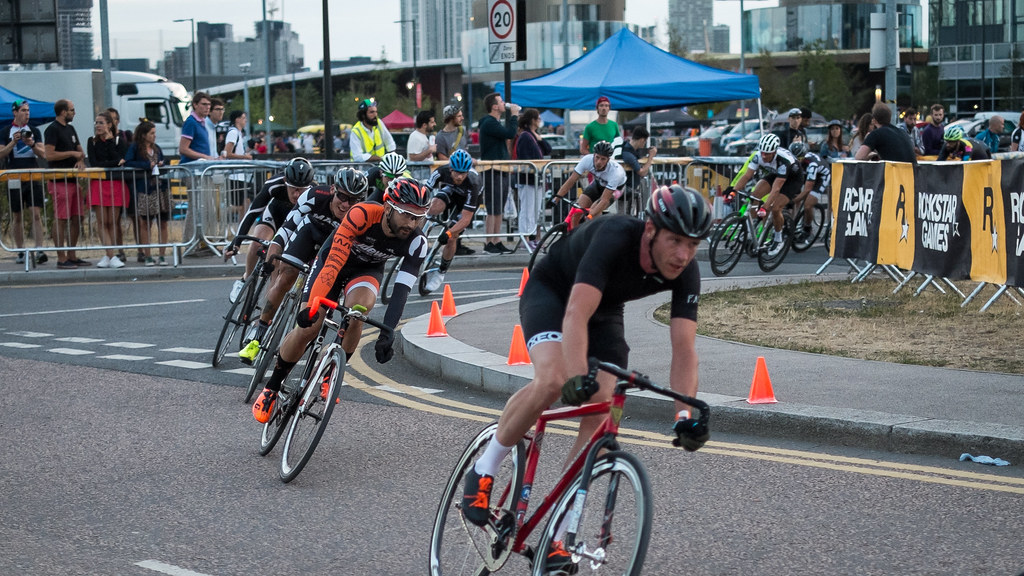 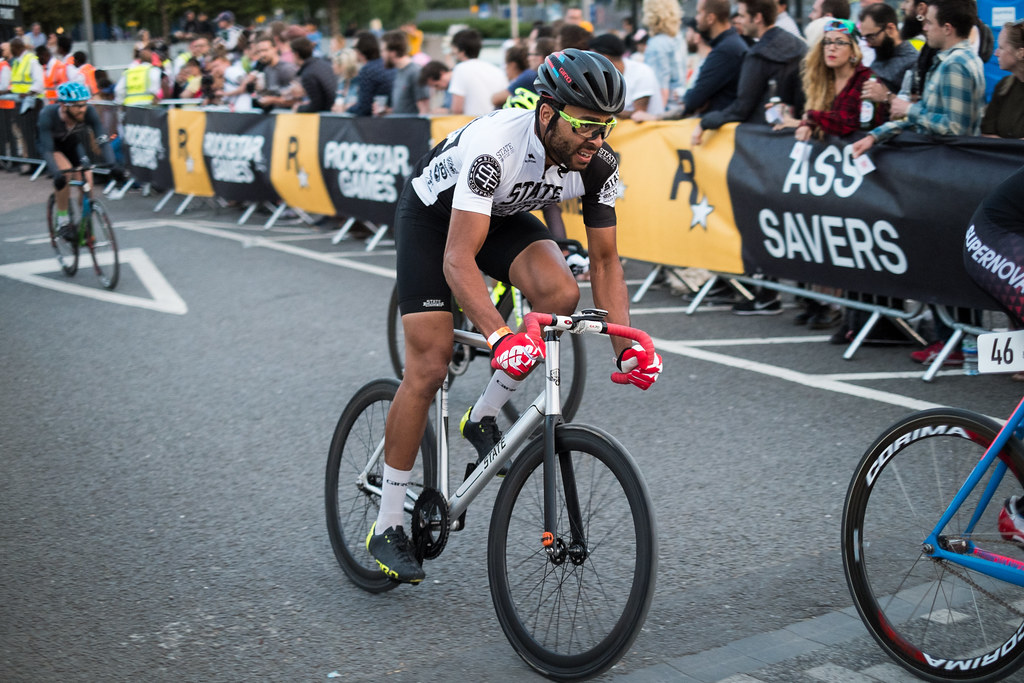 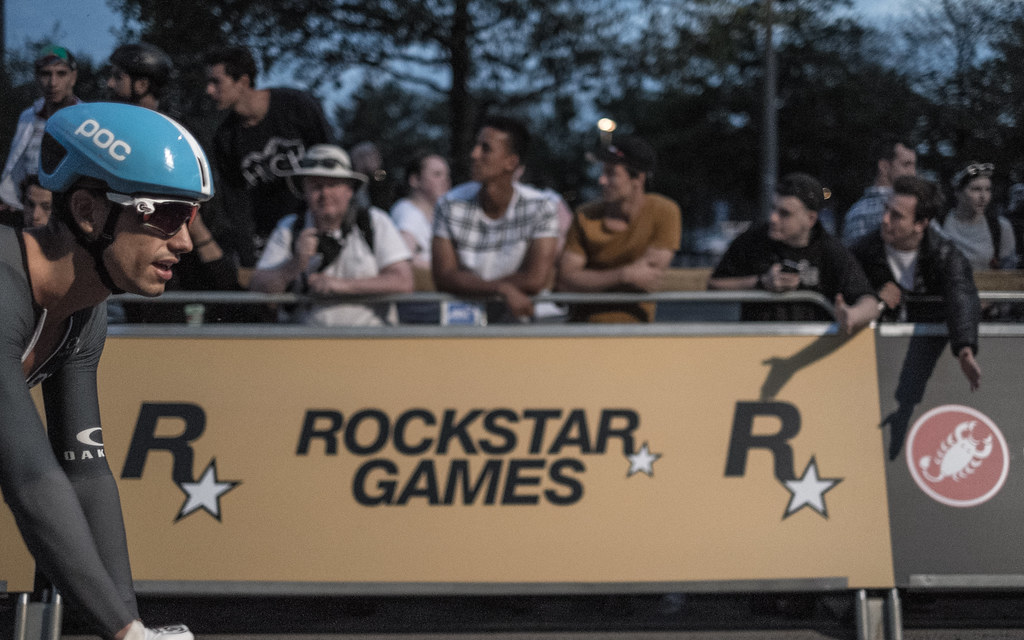 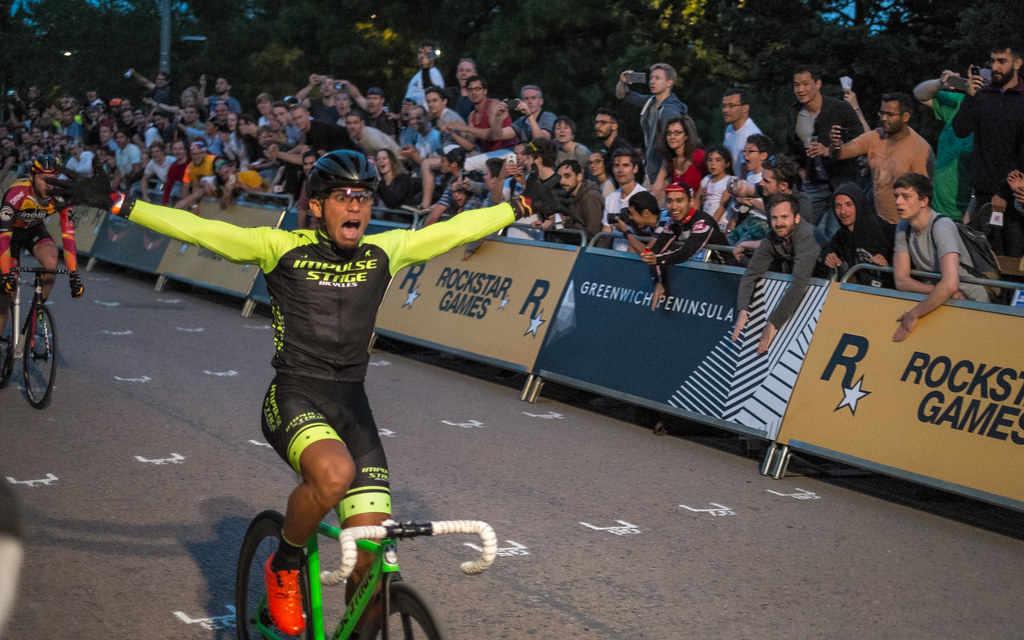 I can only imagine how each and every ride must have felt at the end of the Red Hook, but I was certainly exhausted at the finish! This was through a combination of the sheer levels of excitement I’d spent on the day – seeing it all for filming, catching up with friends and making new ones along the way. 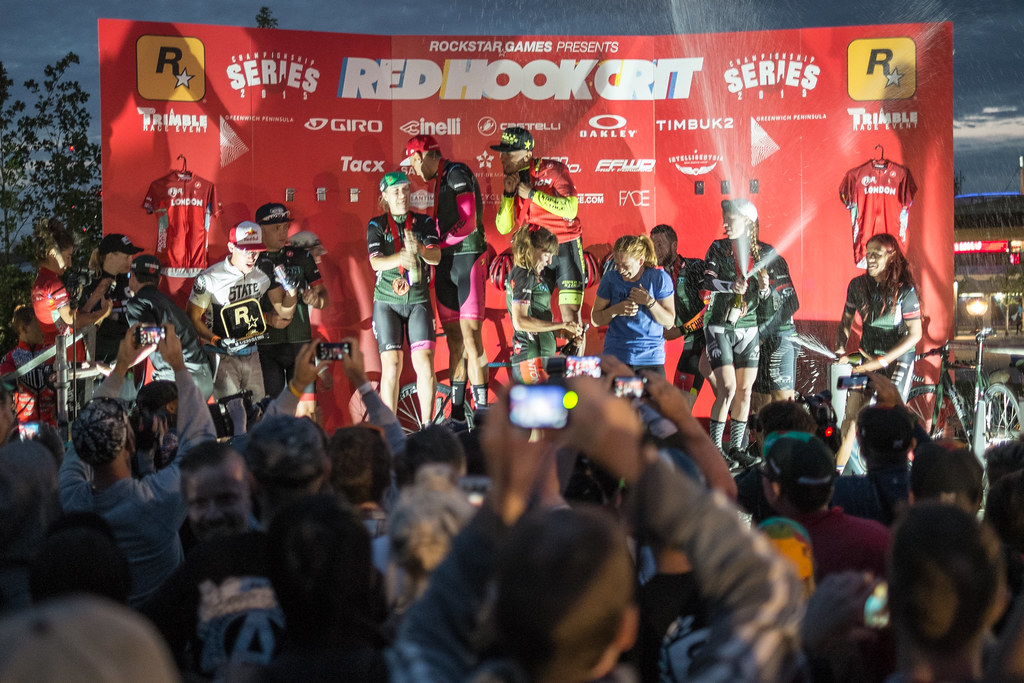 The Red Hook Crit was one of the most fast paced and atmospheric cycling events I’d ever been to: it was a real celebration of that style of racing and such an organic form of riding too: track specific fixed gear bikes with no breaks – YOU and the machine are as one. All that focus, all that control… and all that fun. I’m thrilled to have seen it, and to come away from it wanting to ride fixed gear once again (and figuring out if I could get to Barcelona for the next round!) is quite something indeed…

There is PLENTY going on in Yorkshire when it comes[...]

Three weeks on with the Clubman Urban and it's become[...]

So this track has been out for a while but[...]