Round The Harbours with Premier Inn… the extended version

Remember back in June I did a bit of a bike ride around Portsmouth with Premier Inn? Well, here’s the extended write-up on that ride…

Long time followers of VCG will know that I used to split a lot of time between London and Portsmouth. What’s a bit mad about that is that I’d never actually done a “proper” ride around there before. There was the occasional cycle into town and along the beachfront with The Boy, but that was pretty much it. No exploring and checking out what was beyond the cycle paths…

I finally got the chance to rectify this cycling oversight AND get some extra training in for the Thames Bridges Bike Challenge too. We returned to Southsea to ride ‘Round The Harbours’ and was able to make a full cycling weekend of it with a stay at Premier Inn.

Portsmouth is just 90 minutes by train from London, so this gateway to some excellent cycling country has practically been on my doorstep for all this time! The 40 minute ride from East London to Waterloo was just the start of a very easy journey for a big adventure. Arriving at Portsmouth and Southsea Station, we had a short cycle to our base for the next couple of nights. Between us we had two road bikes and a weekends worth of gear, so we needed space that we wouldn’t have got crashing with friends in the area. With Premier Inn being bike friendly and central to where our ride would begin, it made perfect sense to stay there. We could keep both bikes in our room which gave us utter peace of mind, and there was more than enough space for everything… the room was huge! An added bonus to being there was the desk area and free Wi-fi that I could work on (in-between riding, I’m working on my book which means grabbing every chance I can get to write) AND the power-shower + comfy bed meant that post-ride relaxing was definitely was on the cards. 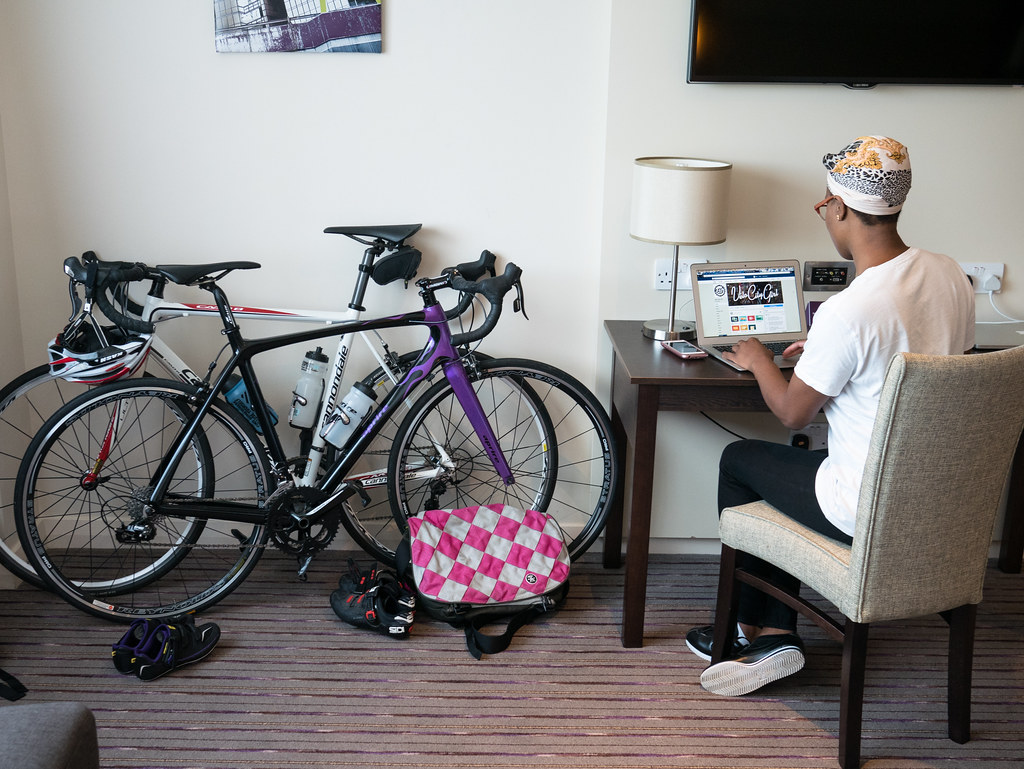 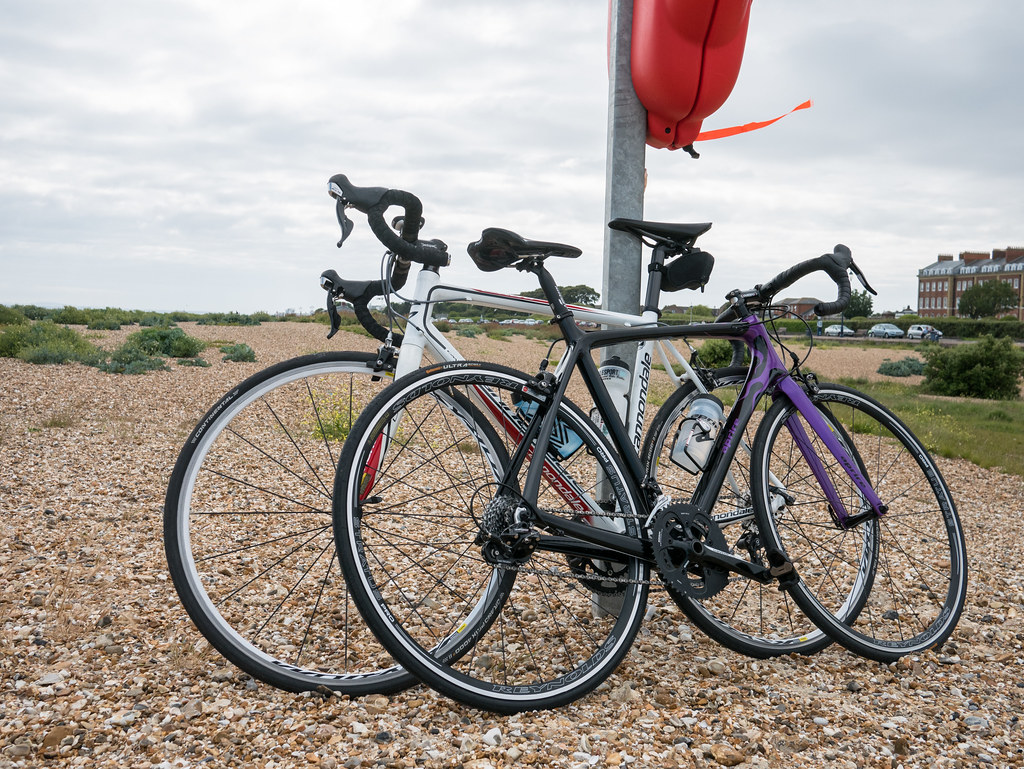 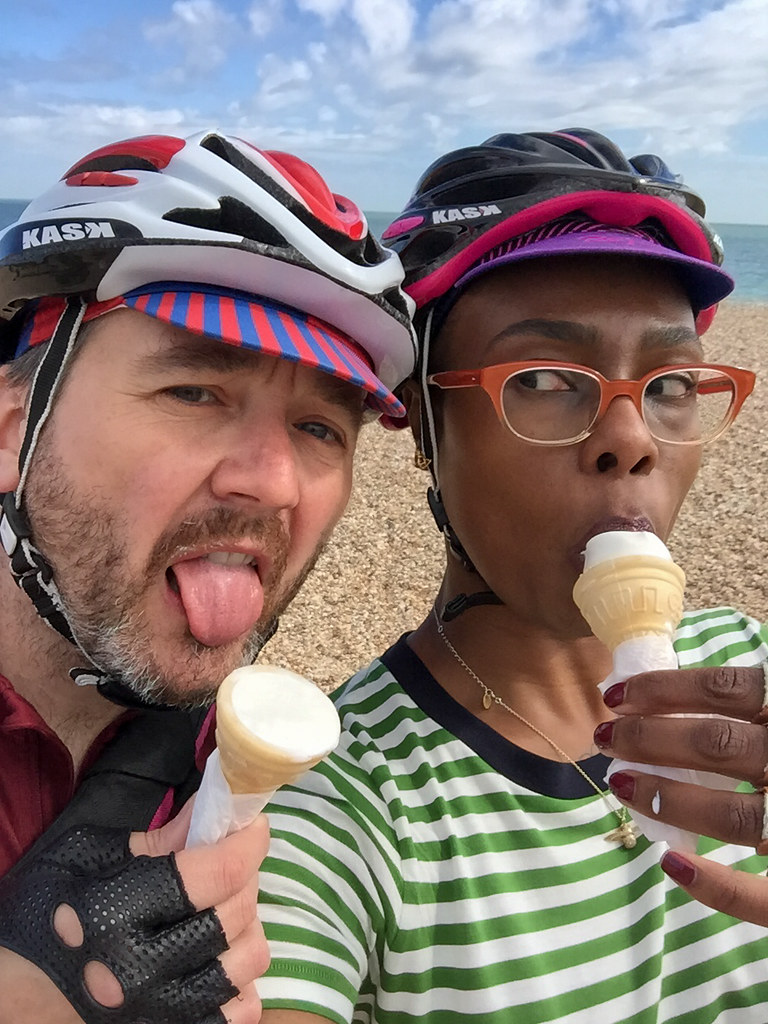 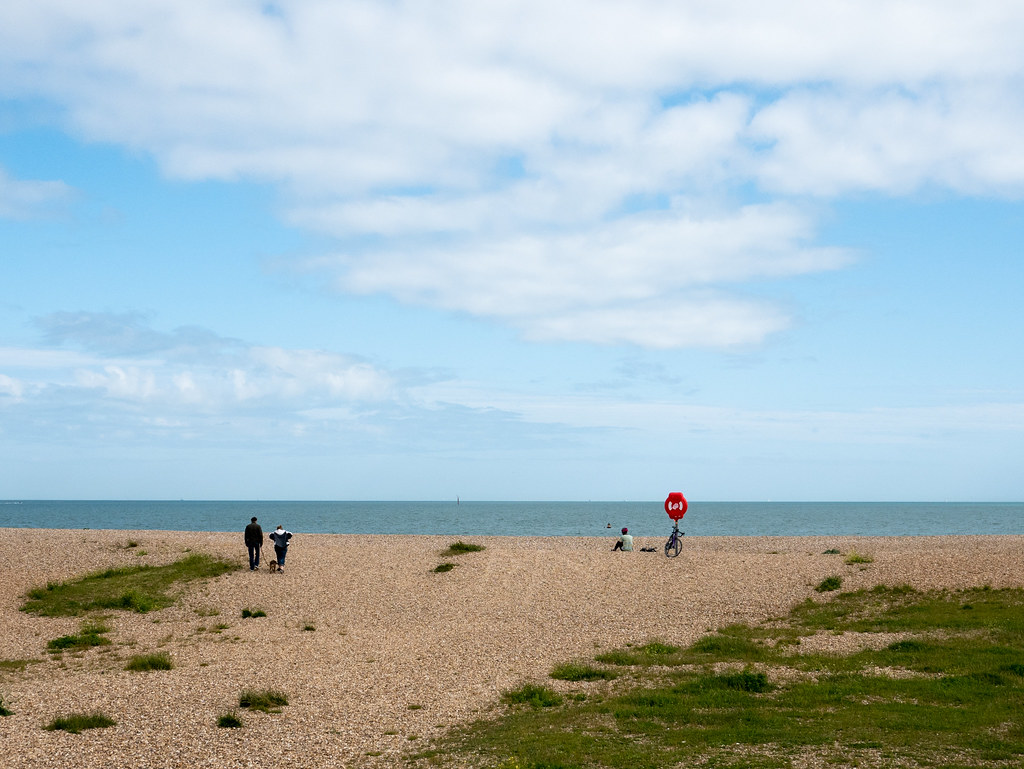 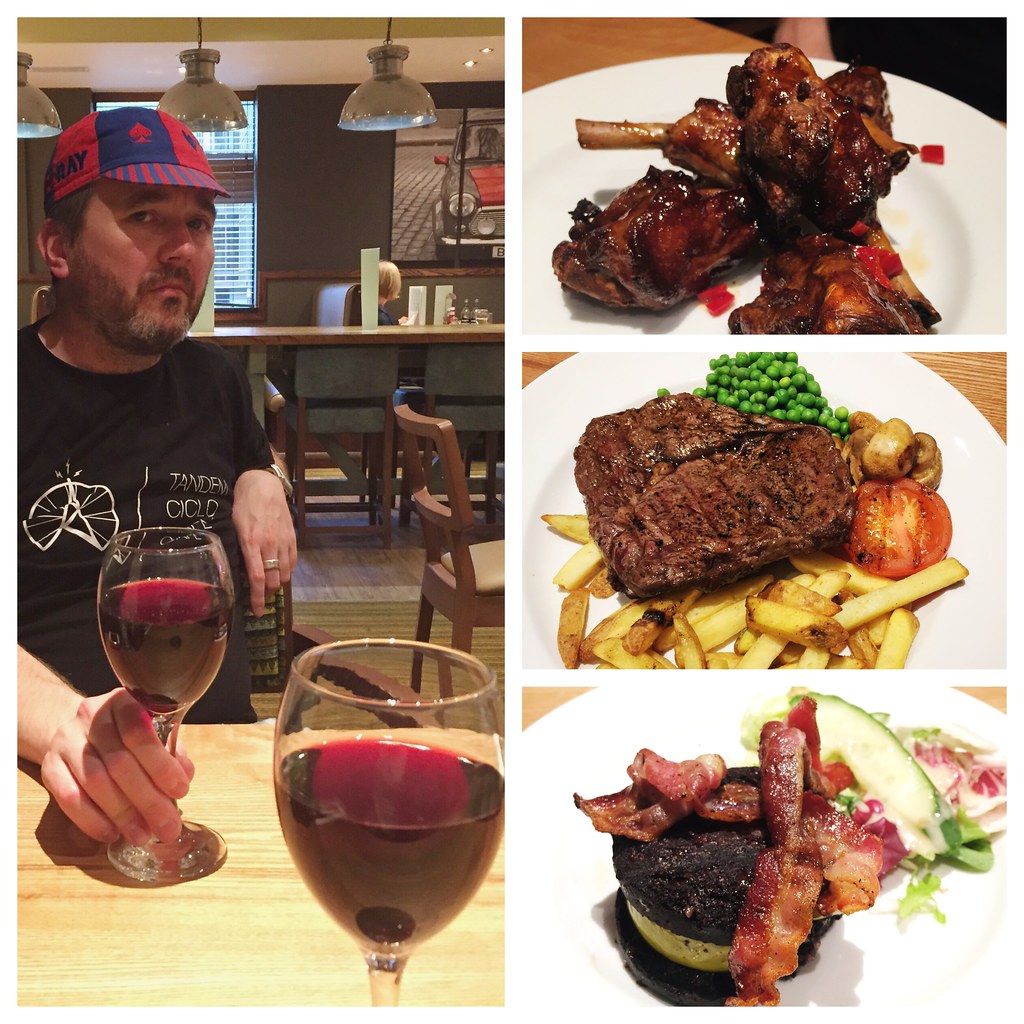 Settled in, we headed back out to recce some of our route for the big ride on Sunday… and to have an afternoon jolly! It had been so long since I’d done Southsea on two wheels, I forgot how smooth it was. The dedicated bike lanes along the seafront (which are all flat) makes it an easy ride for cyclists of all abilities, and we just enjoyed taking a leisurely ride… and picking up ice creams along the way. After riding for hours, we returned to the hotel, and tucked into a much needed two-course meal at Thyme restaurant… awesome fuel after a long afternoon cycling in the sun.

The following morning was the big day: Round The Harbours. A 30 – 65 mile ride (you have the option of different distances), the route takes you around the Hampshire harbours, coastline and countryside. It’s a bit bad to have spent almost 11 years splitting my time between London and Portsmouth, yet never hopping on the saddle to do that ride. This was the perfect weekend to change that… with bright sunshine forecast for the whole day, it was set to be stunning. Taking on Round The Harbours would require lots of energy for the day, so The Full Breakfast (along with a few cheeky Muffins taken from the Continental Selection for the ride) fuelled us up nicely. Setting off after our fill, we rode through old Portsmouth to Southsea, and with the temperature already hitting over 22 degrees before midday, we had to make a stop for some cold refreshment! There are plenty of independent shops to check out in the area, and Southsea Coffee was our number one choice to grab an iced latte before hitting the road again. 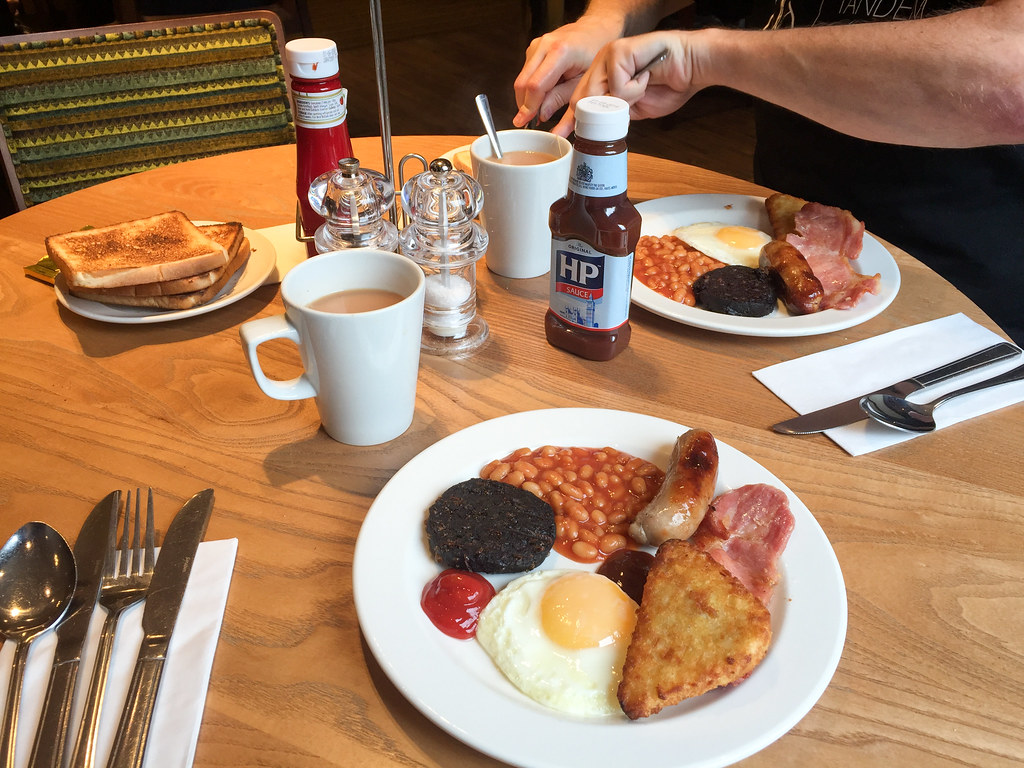 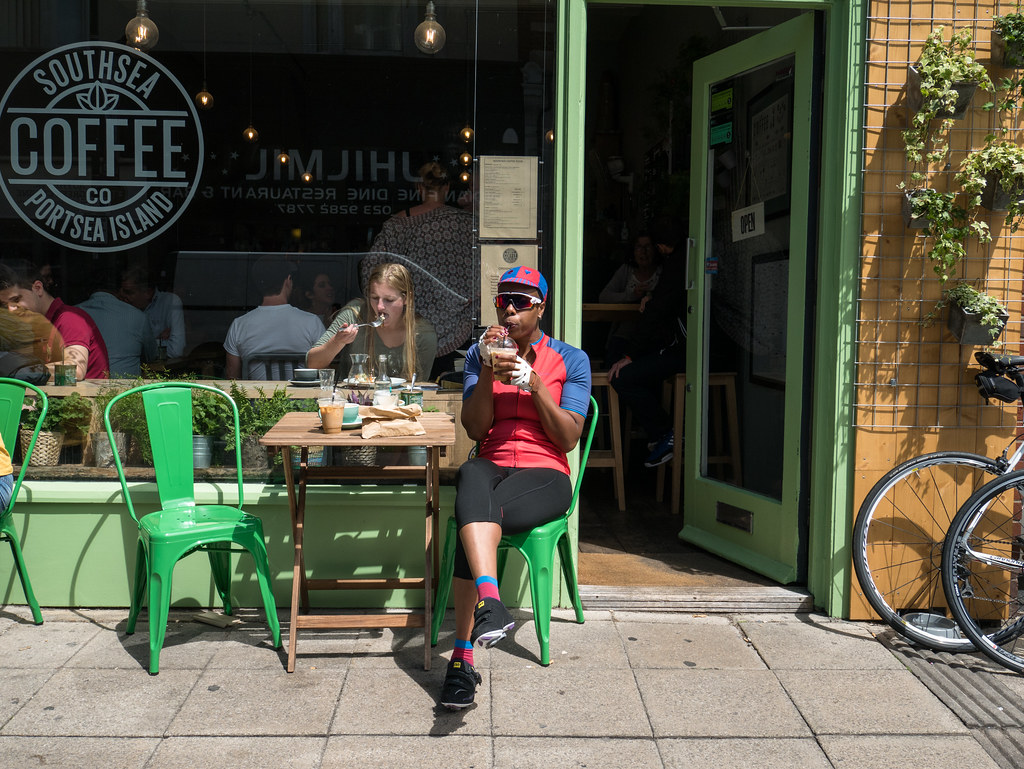 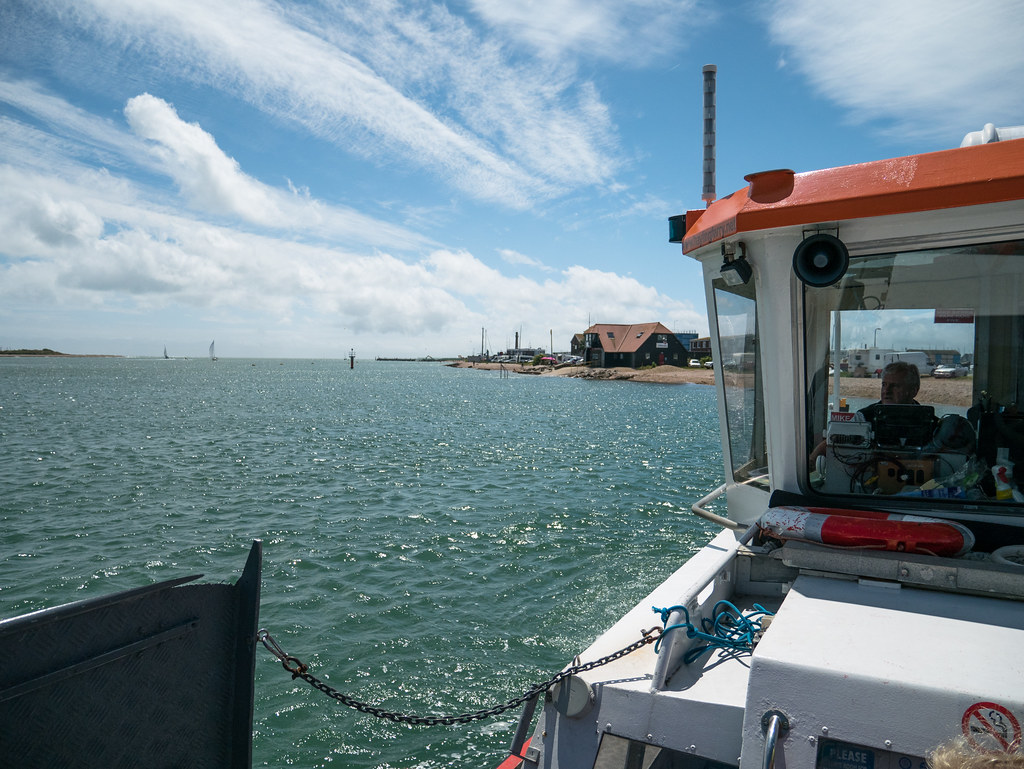 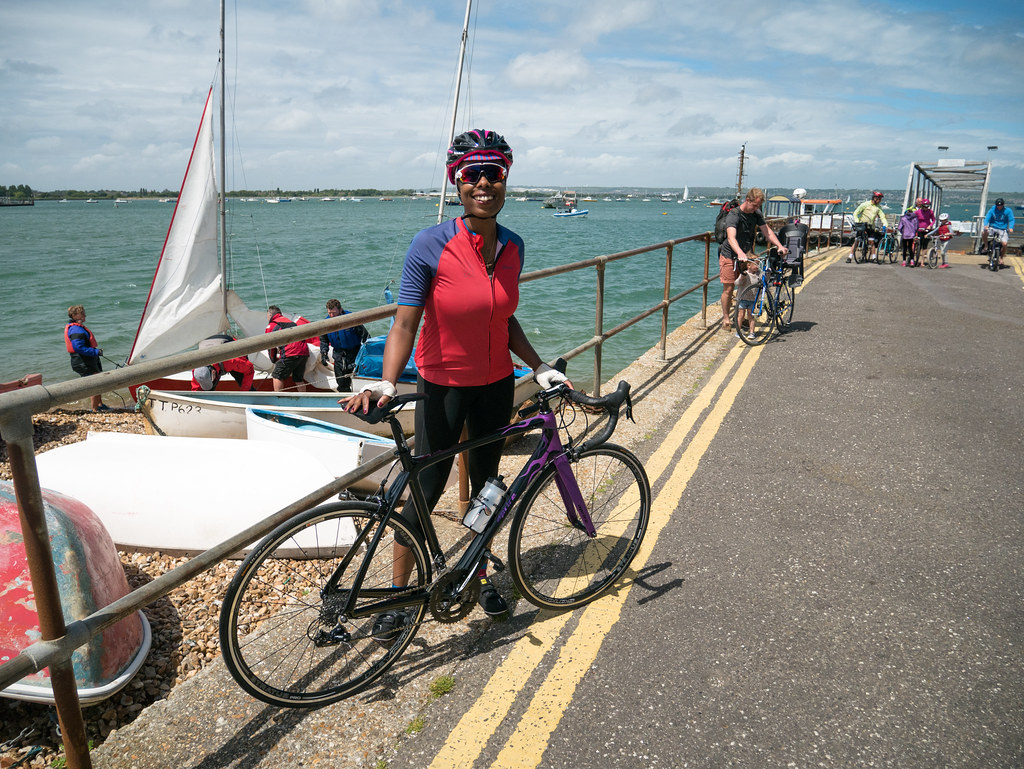 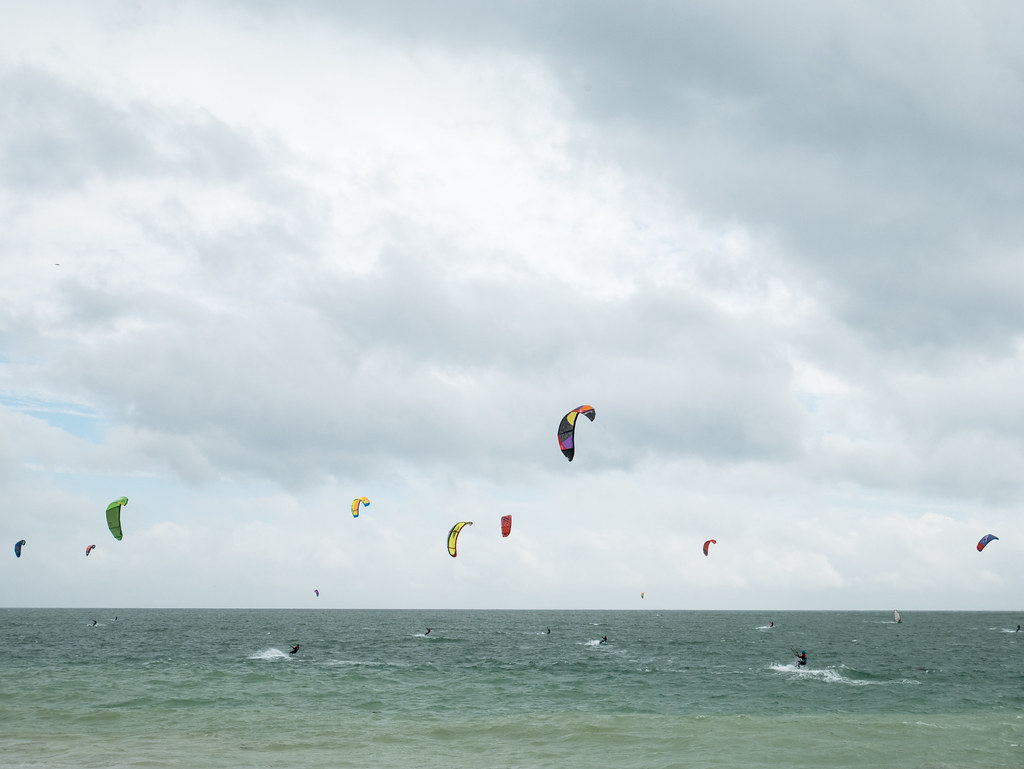 Ferry crossings were a part of our route, and the first one for the day was from Eastney Point to Hayling Island. Even though it was a short journey, sailing on the “Pride of Hayling” was a lot of fun.. especially as most of the passengers on there were cyclists too! Rolling off at West Beach, we encountered a Kite Surfing Festival, so had to stop for a quick look… it was too glorious not to. 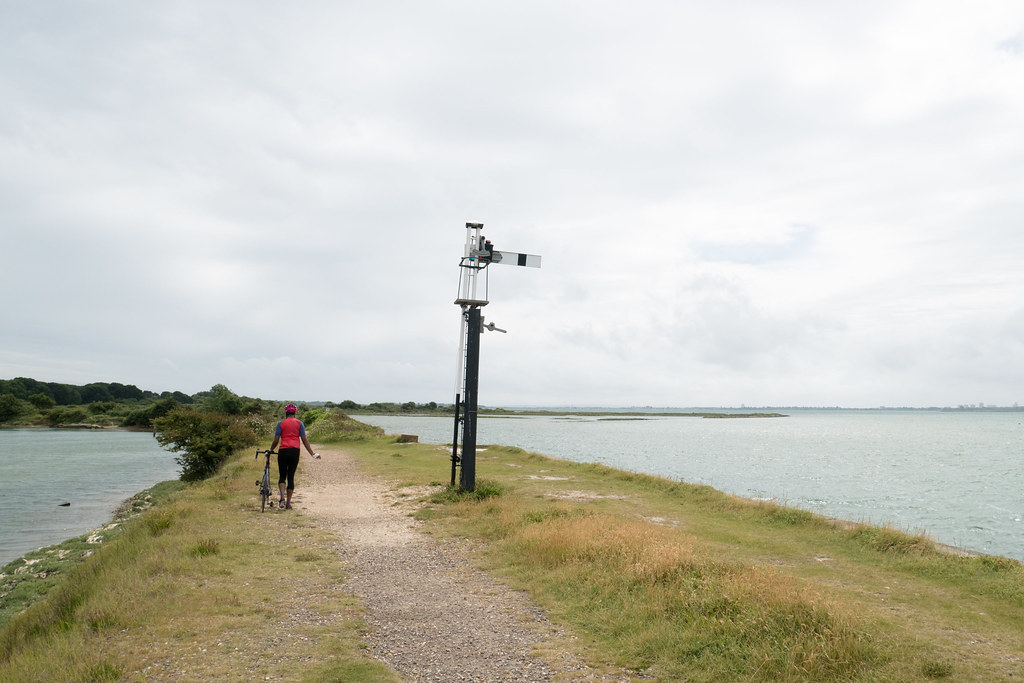 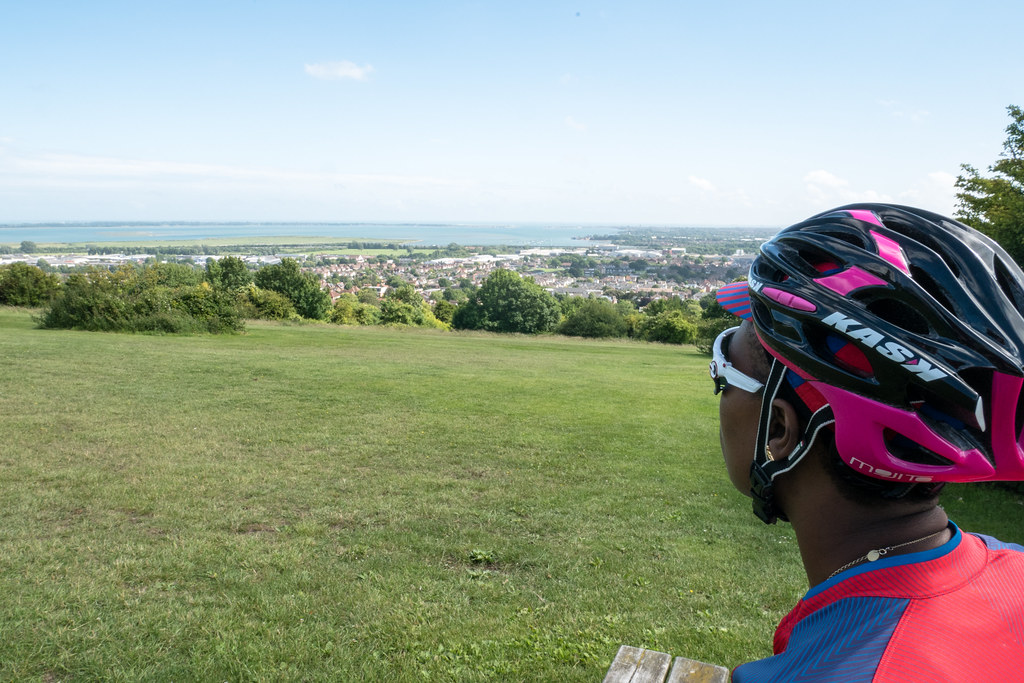 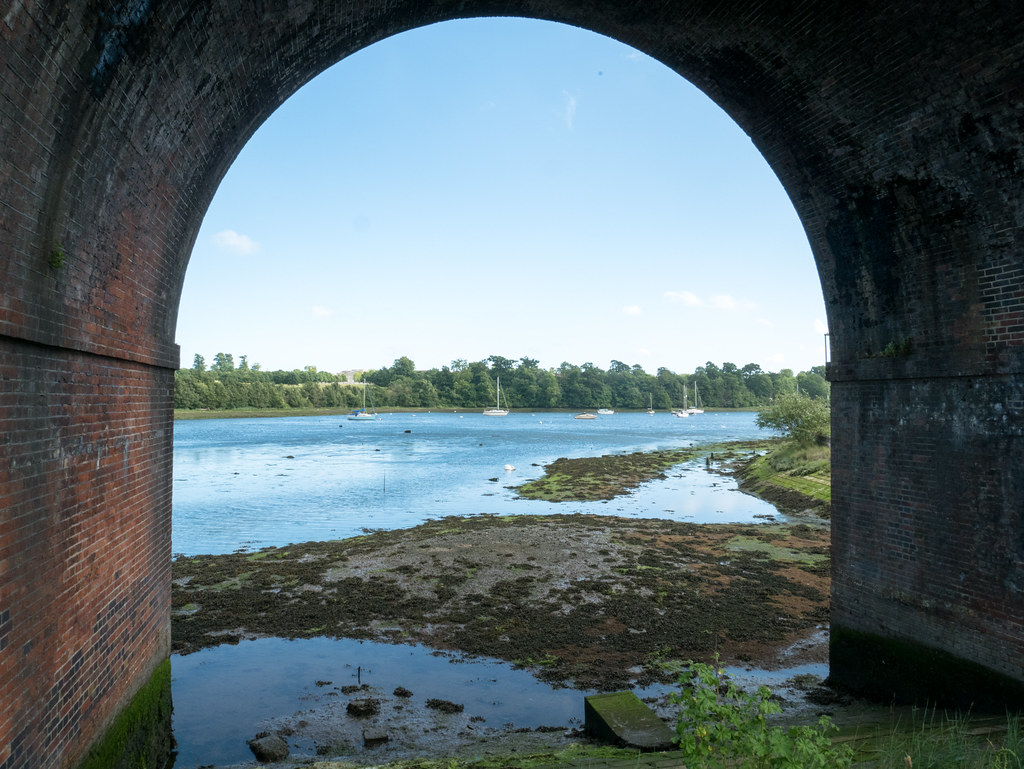 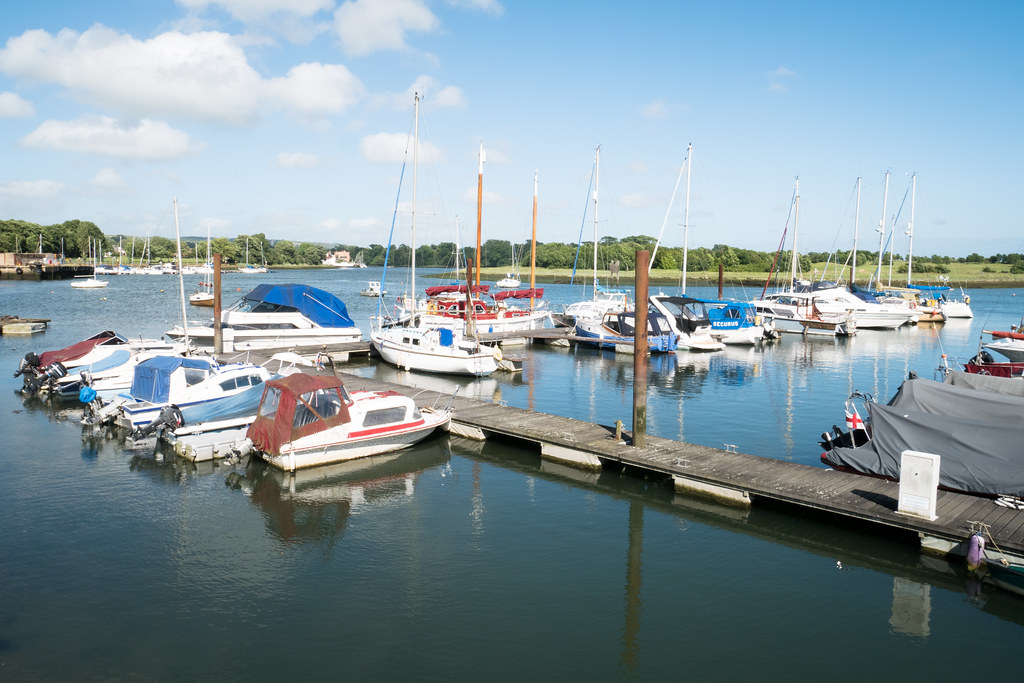 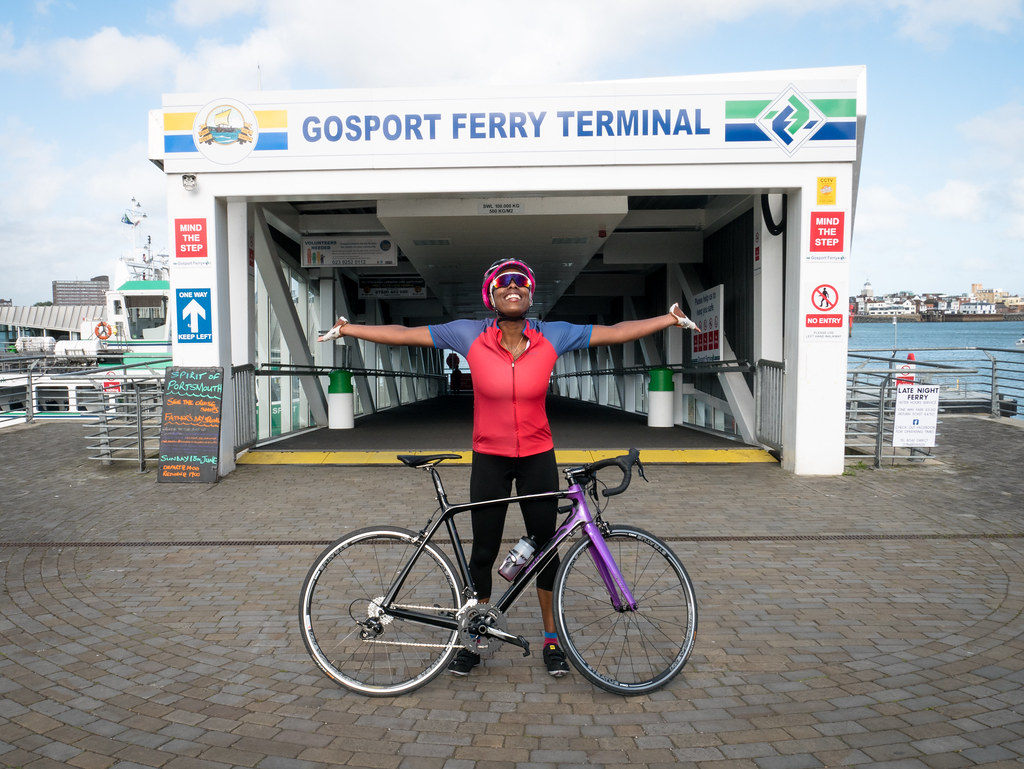 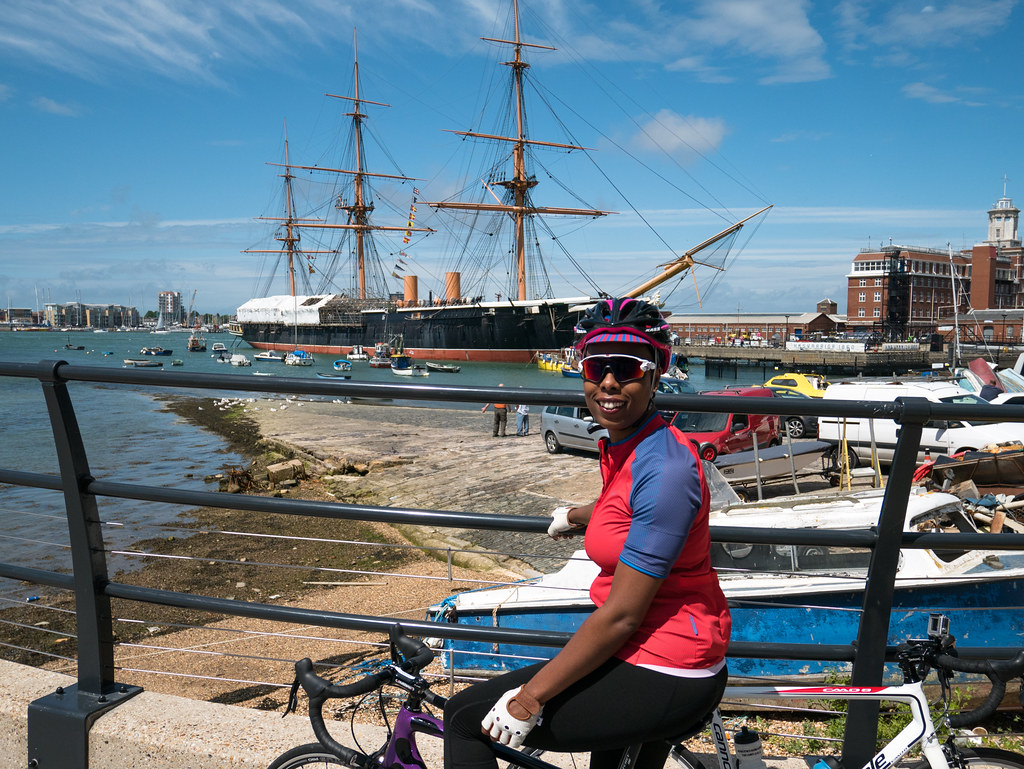 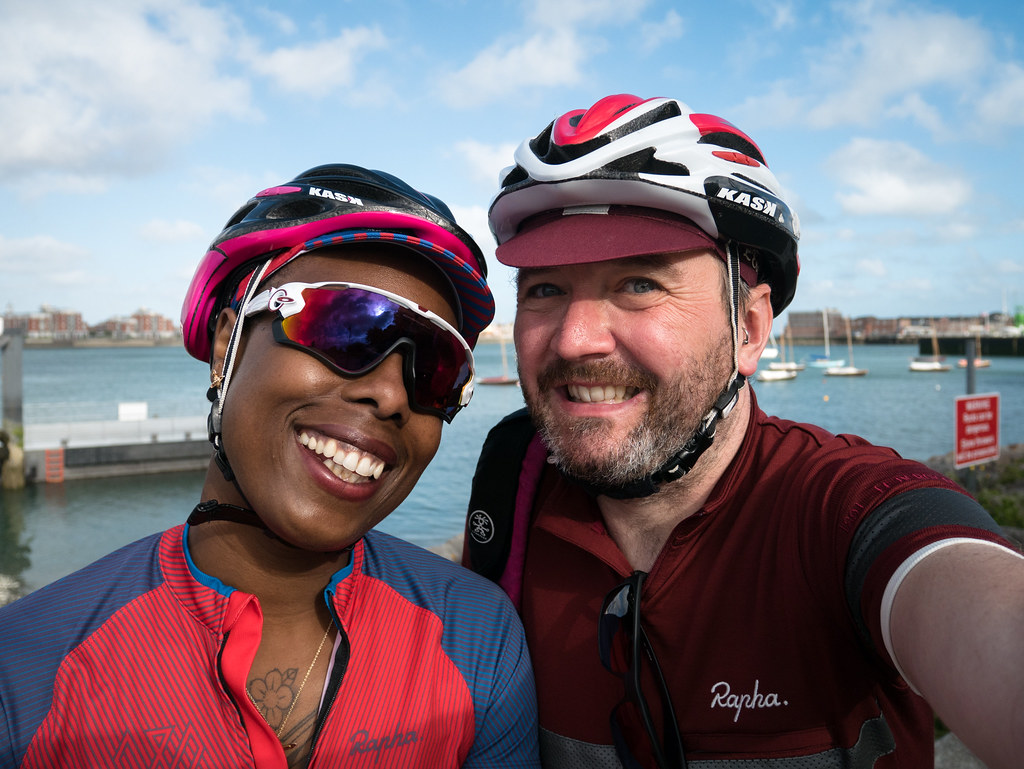 Rolling on, we picked up the Billy Trail to Havant. Again, this was something brand new me, and it felt like a wonderful ‘discovery’ by bike. We were sharing this beautiful costal path with walkers, fellow cyclists and the occasional horse rider! Stunning views over the city and of the harbours peppered our ride over Portsdown Hill to Fareham.

Our last Ferry ride of the day was crossing from Gosport (where I was feeling rather pleased with myself for having cycled so far) to Gunwharf Quays, taking in the Historical Dockyard and HMS Warrior before returning back to base to recover from the day. Never has a power shower and bed felt so good… and we both slept like logs in THAT comfy bed! Doing Round The Harbours has now got me itching to discover other trails around the UK and make full weekends out it too. Now knowing that we can stow our bikes away easily and have all that space and comfort at a Premier Inn, I think it’s time to start plotting some more cycling weekends away around the UK.

If you want to plot your own experience break and need some inspiration, you can check out VCG’s other UK cycling destination suggestions over on Premier Inn, along with some other ace suggestions for adventures such as foodie, mindfulness and walking breaks.

Many thanks to Premier Inn for hosting VCG (and our bikes) for the weekend. This is a sponsored post in collaboration with Premier Inn – Opinions expressed here are those of VCG.

Three weeks on with the Clubman Urban and it’s become[...]

Mixing cycling with my favourite time of the year is[...]