It’d been six months since I’d last been on a bike: an incredibly long dry spell for me, but one I could quite easily attribute to a few factors. There was the bad weather for starters – last winter was a bitterly cold bastard in London, so sticking my bike in the cupboard  from November onwards because “It’s way too cold on my chest with my Asthma” (to be fair, I did have a rotten chest infection in December and was poppin’ inhalers, steroids and antibiotics to the point of rattling when I walked) meant I could convincingly get away with not riding.

There was of course the other valid excuse I had, which I managed to manipulate my own brain into never questioning why I wasn’t just dusting off my bike for a little break and some fresh air. “I’m like, soooo busy writing about cycling, I barely have any time to actually get out there and do it!” A few people I knew who had written books or spend a majority of their time glued to screens for work backed me up with tales of getting lost in similar scenarios too – so I felt like I wasn’t lying to the world or to myself at that point. From the outside looking in, it would have been a piece of cake to just hop on the bike during the winter months for a quick ride to, well.. anywhere. Even if it was just over to the shops to buy milk and bread. There was nothing physically stopping that from happening. From the inside looking out, it was the last thing I wanted to do. Not just because it was cold, not just because I was busy on edits or busy with anything else that was on my list of ‘things to get done’.

“Maybe the change in season will change my mind” I  prayed to myself. Surely something would give when the cold (which as much as I’m a December baby, started to resent it dragging on for so long) buggered off.  Eventually, winter shed its layers of greys, frost and cold, and everything around me started to blossom into new life. The days got longer, and the sky was blue, the grass was green and dotted with Daffodils, trees turned into explosions of pink and white blooms… and every single person I followed online who owned a bike was cycling into spring. It looked glorious. And going by each positive caption on Instagram and Twitter that came with those images of cycling happiness, it felt glorious too.

I liked and faved the pictures, even bookmarking some to an online folder for ‘cycling inspiration’ to get me back out there. Every time I commented on how awesome it looked, I’d be met with comments along the lines of  ‘it’s the perfect weather to get back out there Jools!’ Stuff like that was always said with the best intentions and meant no harm and I wanted to take them as a positive kick up the backside to do it. But I felt so seen. ‘Get back out there’ – it was clear I wasn’t riding even half as much as I used to. I’d been down this road once before in not fancying getting on a bike that much, but for this long? It’d never been that big a gap. It felt like my mind was taking the absolute piss out of me on this.

My mind wasn’t on a huge micky-taking mission. In those months, I’d totally lost my love for cycling. I never thought I’d say that out loud. I talked about the relationship between cycling and my depression on a stage during that lull-period, talked a little about it in Casquette Magazine, and skirted around it on an Instagram post. But outright, how could I tell anyone that I’d completely lost my love for it? How could I say out loud that ‘thing that I do’: blog about, take pictures of, and went into freelancing for (and felt like I’d failed spectacularly at) felt like a big old nothing in my soul. There was no desire to do it at all and that was terrifying.

I’d figured the unwelcome return of my depression and bouts of anxiety many months earlier had to be a big part of this. I talked about ‘losing it’ openly for the first time a few weeks ago in a Whatsapp chat, with a group of amazing friends who I felt comfortable saying it to. One of them started talking to me about Anhedonia – the inability to feel pleasure in normally pleasurable activities. I’d never heard of it before, and self-doubt and paranoia had me believing I was the only person in the world feeling like this about something I loved so much. This hit the nail on the head about my feelings towards cycling. Opening up to the women in that group turned out to be the first step towards opening up to myself and perhaps trying again… only when the time was right and if that time actually came.

Last Saturday, me and Ian spent the day wandering around East London. It was glorious – the weather was hitting highs of 27ºC (no matter how much I moan about the heat, there is always something ace about London in the grip of a heatwave) and we had no agenda at all. We walked to some of our usual haunts like Brick Lane, Old Spitalfields Market and various coffee shops along the way. Wherever the mood took us, we went. I kept on thinking about how much I loved doing that on a bike: just hopping on a bike and seeing where the mood would take me. For the first time in a long time, I felt a jolt of excitement in my gut about that. So I acted on that gut feeling.

“We’re going out riding tomorrow”, I told Ian – “I don’t know where, but I’m getting Frankie out in the sunshine”.

I’d always thought something like RideLondon or any one of the Eroica sportives I took part in would hold the title of being one of the hardest rides I’d ever do. It would be one of those gnarly ones where your legs are screaming at you to stop, your arse is hurting like mad from being on a hard saddle for way too long, and the levels of flap-mash are enough to bring tears to your eyes. Nah… getting ready to head out last Sunday took that crown. As much as I had that hot fire burning in my belly about going for a simple ride (and riding with Ian which hasn’t happened for a LONG TIME) there was nothing simple about the levels of anxiety that were building up in my head. It had been six months ffs – half a year of feeling zero inclination to cycle anywhere, and this had the possibility of being a disaster.

I got Frankie out the cupboard. Basic maintenance check done, frame dusted off and tyres pumped. I got showered, dressed in an outfit with a bit of cyclestyle in mind (hello #oldskoolladyvelo) and headed out the door with Ian. For the first five minutes on the bike, my heart was pounding out my chest – maybe through nerves, or maybe because I forgot how much of a tank Frankie can be to ride – but when that feeling passed and things just started to click back into place, it felt so fucking good. The sun was beating down on my back, the breeze created by cycling was cooling down the beads of sweat collecting on my face, and for the first time in a long time, I could feel myself smiling while on a bike again. The ride wasn’t massive, and instinct guided us along the CS3, through The City and over to Prufrock in Farringdon for Iced Lattes, sticky Cinnamon Buns and laughter. Then we cycled over to Look Mum No Hands to do nothing but knock back cold drinks in their garden – something I used to do on SUCH a regular basis but hadn’t done since last summer. I shit you not. And while the sun was still up, and the evening was balmy, we took a slow-roll back home. 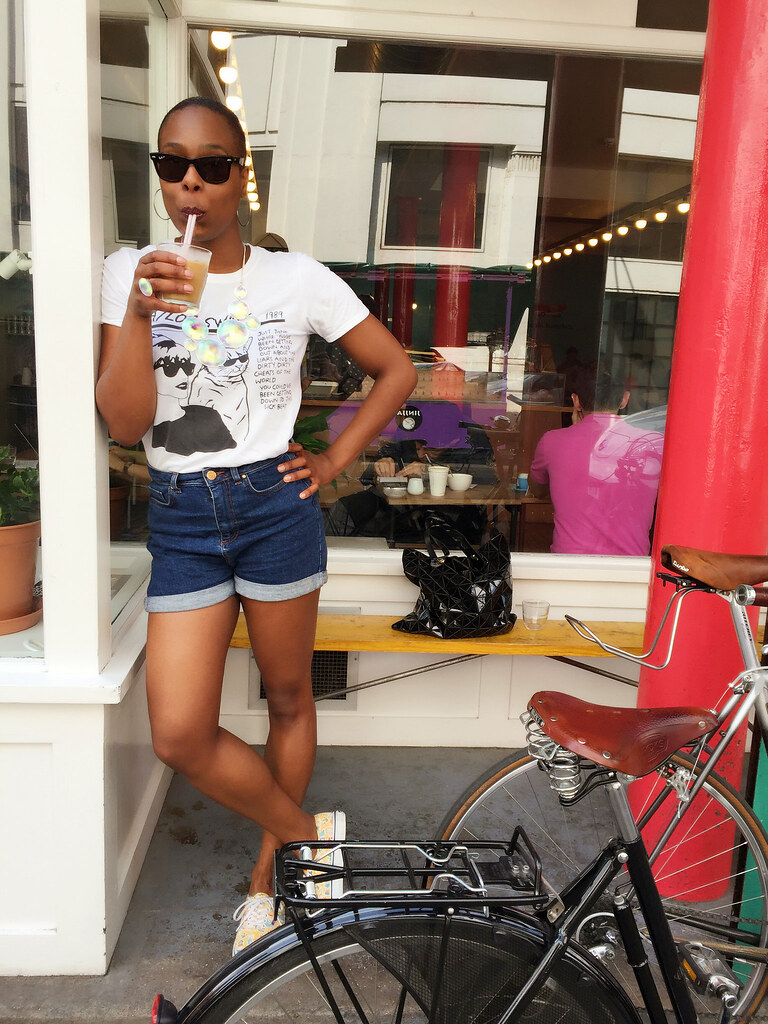 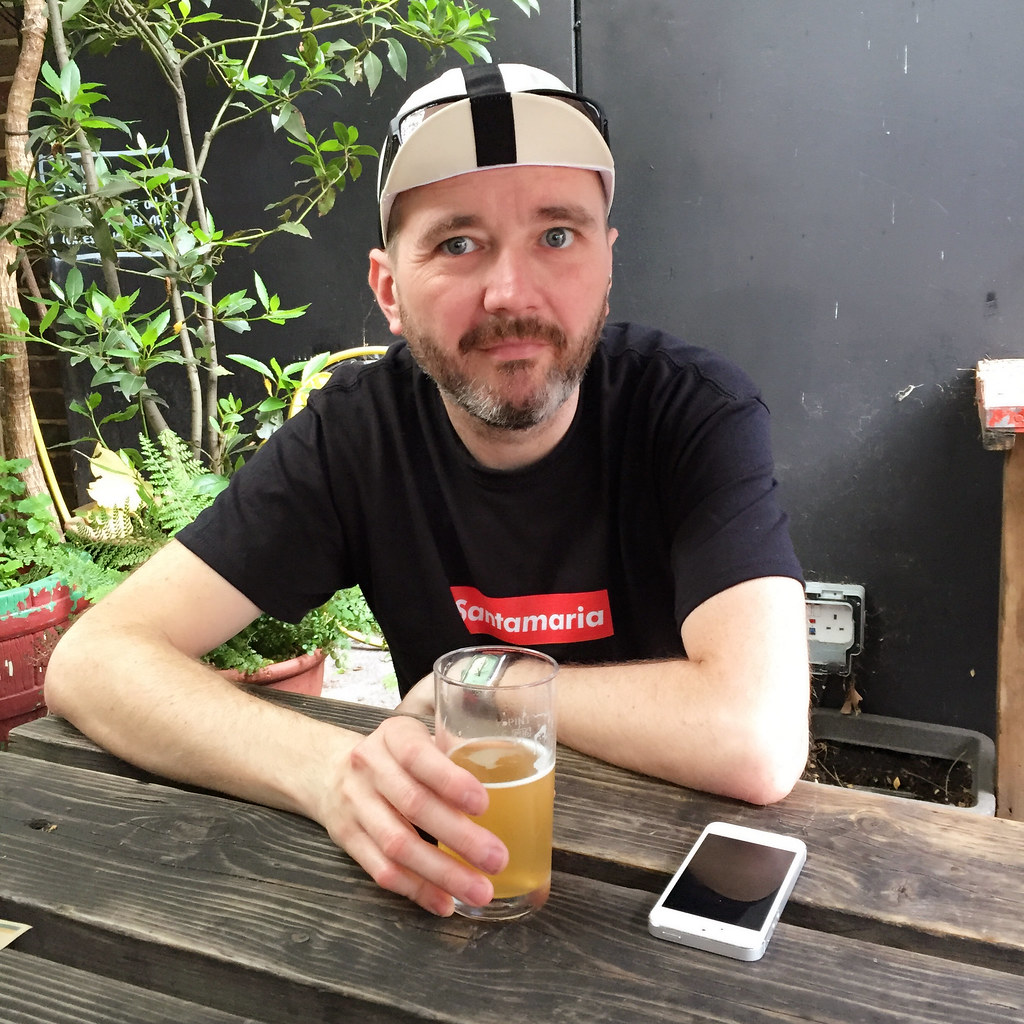 It was the ride that I didn’t think I would ever be able to do. I’d lost sight of everything I loved about being on a bike and just enjoying it for what it is. I’d spent six months away from it, which felt like a lifetime… but part of me recognises that I probably needed to have that break. I had to step away from beating myself up about how I was feeling (g’ah, depression), and giving my mind ammunition to pick itself apart by comparing myself to every other person online who seemed to be out there ‘smashing it’ on a bike in every way possible, and what a failure it made me that I wasn’t doing that.

I needed to do ‘me’ and still need to. I’ve been juggling a lot of things on my plate – and finally realise I have to give myself the time to breathe and find out what I want. I needed to see if I could rekindle that flame, and *deep breath* – I told myself that if it didn’t happen, that would be OK too. But a little spark re-lit the fire inside of me. It’s on a slow-burn at the moment, but I’m getting there… which should hopefully include more posts on the blog… something I have missed doing a lot. Lets see how it goes eh, one pedal stroke at a time.

My favourite cycling event of the year swung around[...]

In February, I took on what felt like the biggest[...]

As I'm slowly getting myself back into a cycling groove, I was totally in two minds about heading to this years London Nocturne. If it was anything like 2016's (the last time I went - also... where the hell have two years gone?), being at heaving event with cycling-anxiety issues may not have been the best idea I've ever had. If I didn't feel comfortable, I knew that I could always pull the eject chord...