I’ve taken part in big sportives before, but I knew that RideLondon was going to be totally different. The obvious reasoning for that would be “well, you’ve never done it before, so of course it’ll be different to the others Jools… duh.”

I know that, of course I do.
But this was really going to be something else.

There’s no denying the excitement of getting a place was a factor in how I was feeling about it. Every year since it started, I’d pop in a ballot entry, wait for months in anticipation… and then get that dreaded “Commiserations” magazine in the post. “That’s cool… maybe I’m just not supposed to do it this time round”, I’d tell myself and leave it at that. No biggie. This time, my chance had finally come to take part. Instead of watching RideLondon set off from my proverbial back garden, I’d be on that start line in Stratford (my home turf!) with thousands of other cyclists, all ready to ride those 46 or 100 miles ahead. But in amongst all of that excitement, there was this other ‘thing’ making this sportive unlike all the others before it; my own fears playing tricks on me. This wasn’t about the worry of crashes with other participants, annoying mechanicals or bonkers manoeuvres happening on the roads. It was more about my own niggling-self doubts getting the better of me. Here’s where I need to admit to something. I’ve been in a weird headspace about my relationship with cycling for a while now and on the morning of RideLondon, all those thoughts started to rear their ugly heads. 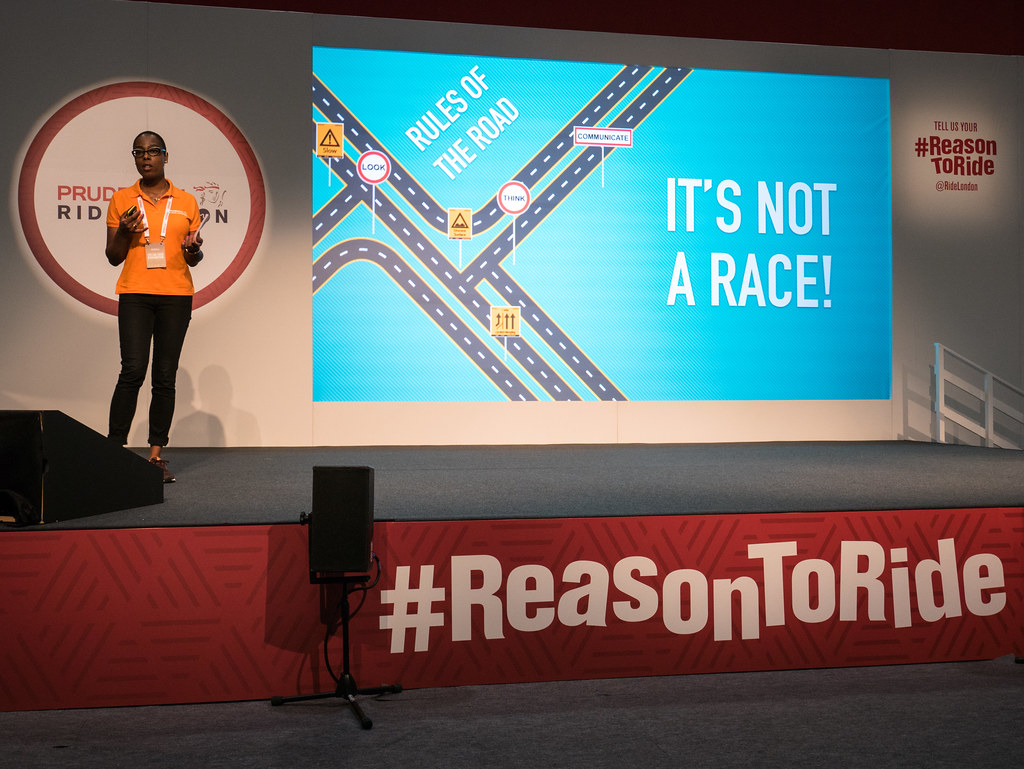 The funny thing was, in the immediate lead up to RideLondon I had become absolutely pumped about it. I’d spent the Thursday through to Saturday talking to thousands of other riders about the ‘rules of the road’ and even when my usual nerves about public speaking crept in, I genuinely forgot about that and got lost in the excitement of it all. The cycling happiness bubbling away inside of the ExCel was truly contagious – from first timers like myself and seasoned participants picking up their registration packs, it was hard not to get swept away in all their joy. Stepping off the stage for the final time on Saturday afternoon, I was 100% feeling it. I was also telling myself that ‘back then’ with every failed ballot entry, it wasn’t my time to take on RideLondon, but this was definitely it. At last, I actually felt like I was ready to do this.

On the Sunday morning, it felt like a totally different story.

My worries which had been kept at bay by all that excitement, returned the moment I woke up. Ian (who was doing a stellar job at trying to boost my mood all morning) picked up on something not being quite right with me too. “Not today, mate” I was telling myself… this wasn’t allowed to happen after having been on such a glorious high. I was hoping it was the mix of bleary-eyed tiredness + pre-ride anxiety making me feel a bit rubbish, but I knew I couldn’t dismiss it as that. It was too late. Suddenly, all I could think about was all that stuff that hadn’t clouded my mind for a few days.

All that clarity I had of just focusing on the ride and enjoying the day was rapidly fading. I knew it wasn’t a race or a competition, but I had of course pitted myself against my own worst enemy – Me, especially when I’m not in the greatest mental space… and I start comparing myself to others. There was part of me that felt like I had something to prove to both myself and god knows exactly who about doing the ride, like it was some kind of weird rite of passage as a ‘London Roadie’ that I needed to take. I’d done a few big rides just a few weeks before the event, but in comparison to others I’d been looking at online, it felt like I’d not done enough. I wasn’t out there with any cycling clubs doing early morning laps of Regents Park, or climbing Box Hill every Sunday until ride day. I was doing it at my own pace and what worked for me, but of course I reverted to feeling like I’d done it all so majorly wrong. Where was this pressure coming from? It’s human nature to compare yourself to others, but when it gets to the point of being so destructive to your own confidence and goals, something has got to give.

The day wasn’t allowed to turn to shit before I’d even left the house, so I needed to focus on the good stuff to push the niggling self-doubts away. I looked over at my kit hanging on my bedroom wall before pulling it all on, and a little spark of joy reignited again. My road cycling wardrobe had recently grown thanks to new additions from The Cycling Store. A Bobet Blue Jersey and Hot Coral Bibs by Queen Of The Mountains were waiting to be worn for this day. My brand new, gleaming white Espada road shoes were gonna get properly broken in on this ride. The kit all looked damned good, and as shallow as it may sound to some, it would make me feel damned good too. Never underestimate the power of clothing to make you feel fantastic. Yes, there was an element of ‘Power Dressing’ for the day, and that was nothing to be ashamed of – especially when you think about the origins of the term, and the environment I was about to cycle into.

Suitably fuelled and feeling a bit more fly with myself, we left home around 7am, cycling to the other side of Newham. It was blissfully quiet at that time of the morning, but that started to change as soon as we joined the Greenway. You see plenty of people on bikes where I live which is nothing new, but this was something else. Bunches of cyclists just seemed to be appearing at every cross-point of the route, all heading towards Stratford. Everyone was looking at each others rider numbers, and giving each other a knowing nod and smile. Despite the fact that some of them would have been on the road a LOT earlier than me and Ian, their happiness for the day ahead was shining through their yawns. My mood started to buzz upwards with this, and as we pulled into Queen Elizabeth Park, the good vibes in the air could be cut with a knife. 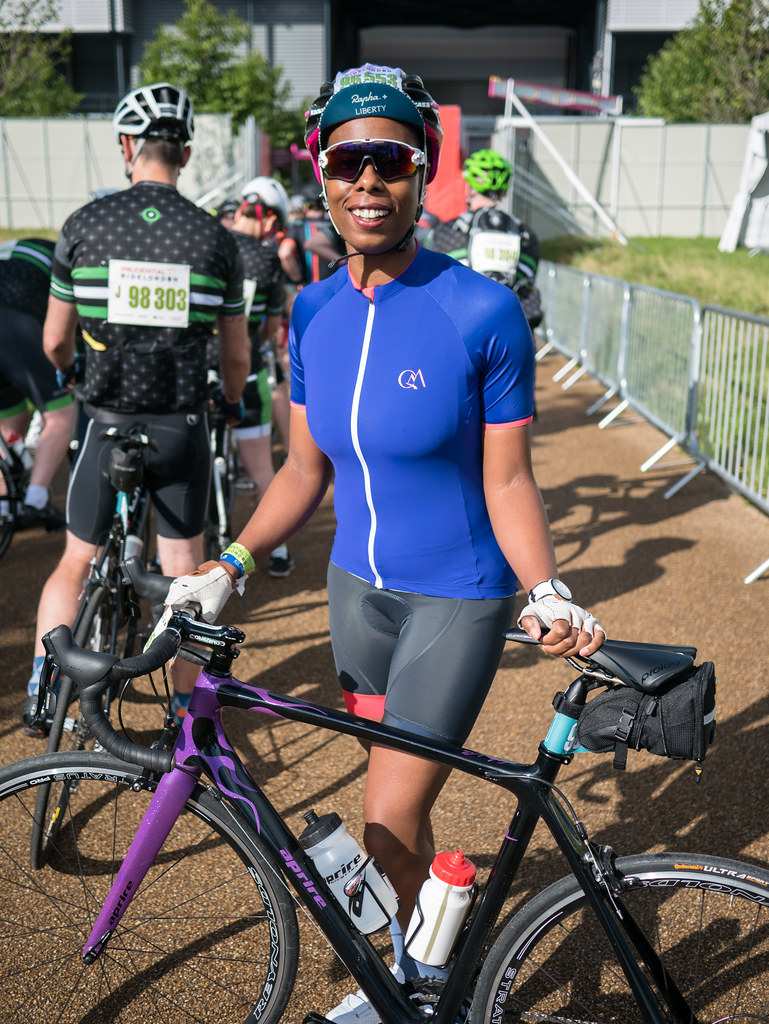 Our very lovely set-up for the day meant that we could hang around in the Velodrome and grab an extra breakfast before setting off for the ride. It also meant their was an opportunity to do some serious people watching. Being up there, I could look through those high windows that towered over the park and clock almost everyone who was streaming into the grounds. Seeing thousands of lycra clad bodies attached to bikes, all taking part in RideLondon got some of those earlier thoughts whirring around my mind again, and bubbling to the surface. You can’t help but notice what the demographic of the event is like; predominately male, middle aged and white. Even on those years when I wasn’t taking part and watched from the sidelines I noticed it. But actually being there and shuffling along to the start line? I noticed it more acutely than ever.

Even though cycling is pretty much 90% of my life and what I ‘do’, I’d be a liar if I said I didn’t feel a little bit out of place. That was one of my biggest fears, haunting me in the lead up to the day – feeling alone and like this wasn’t a space for me, or women like me to be in. I wasn’t going to turn around and go back home though. One of the things I was encouraging people to do while talking at the ExCel was to share their #ReasonToRide, and I got to thinking about the message I’d put out on social media the night before. 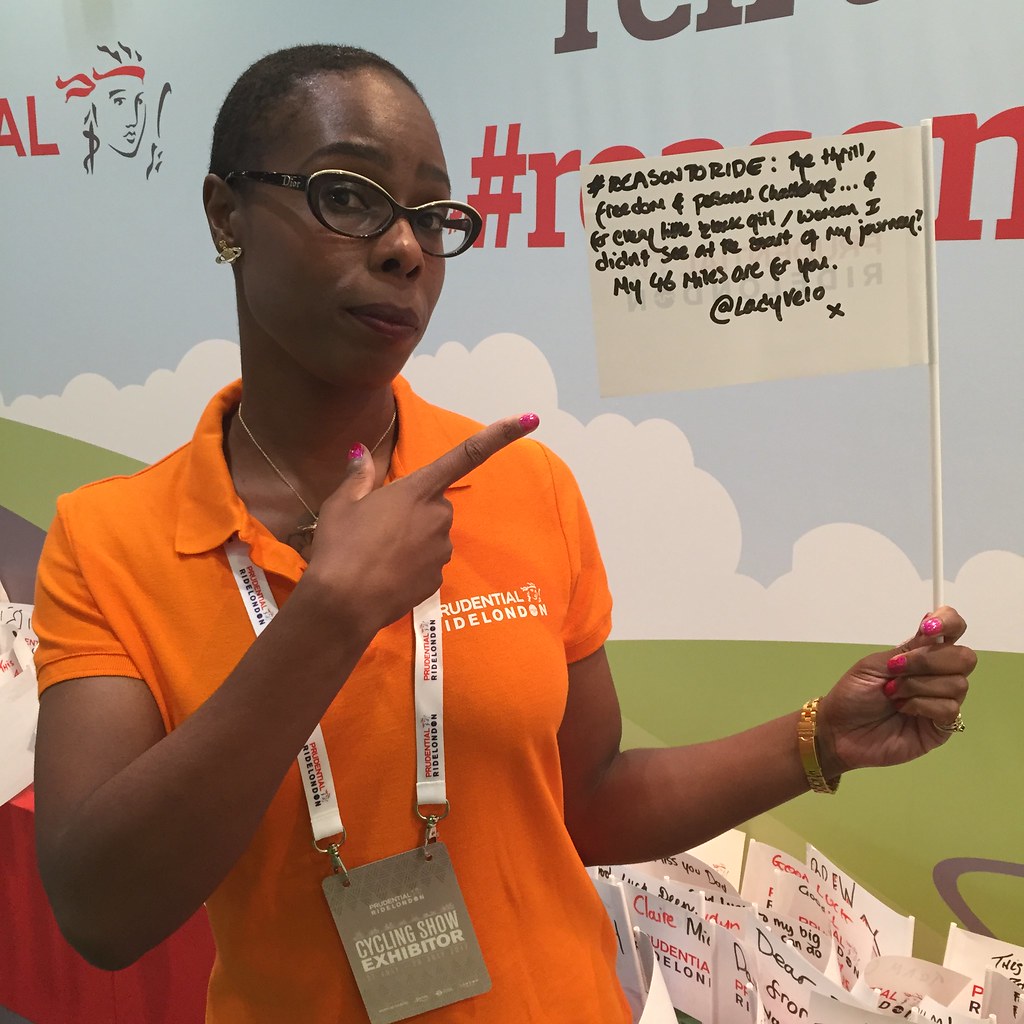 “The thrill, freedom and personal challenge… and for every little black girl & woman I didn’t see at the start of my journey? My 46 miles are for you.”

That was my reason to ride, and that was the mental push that got me over the start line.

The countdown ended, the flag was waved, and the moment I clipped back in and started my ride, I started to feel damned good. I was terrified that my anxiety and self-doubts would get the better of me and ruin my day, but they didn’t. I DID cycle through those closed roads of London (the “OMG 😱” factor of that will never not have me geeking out), I DID ride alongside people that might have been 101 times better than me, and may have wondered “why is she here?”, but I didn’t give that a second thought when I was out there. They were my 46 glorious miles which were laced with laughter, friendly faces, struggling a bit on Wimbledon Hill, getting a tiny bit wet in the rain, and crossing the finish line with a massive smile on my face. 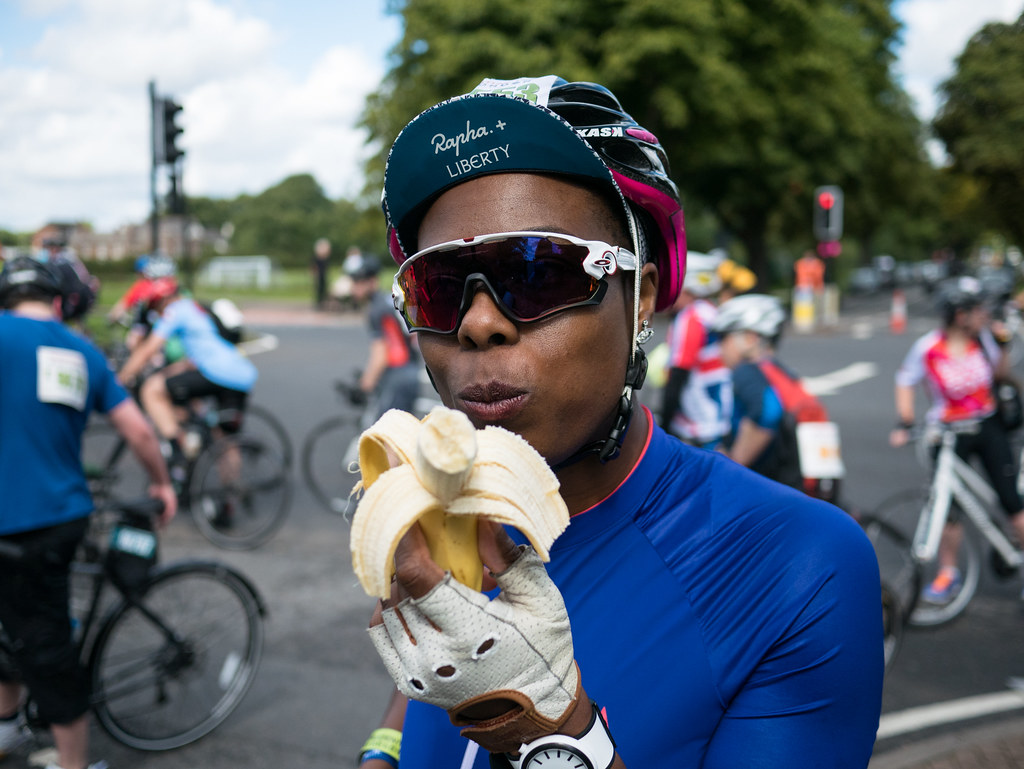 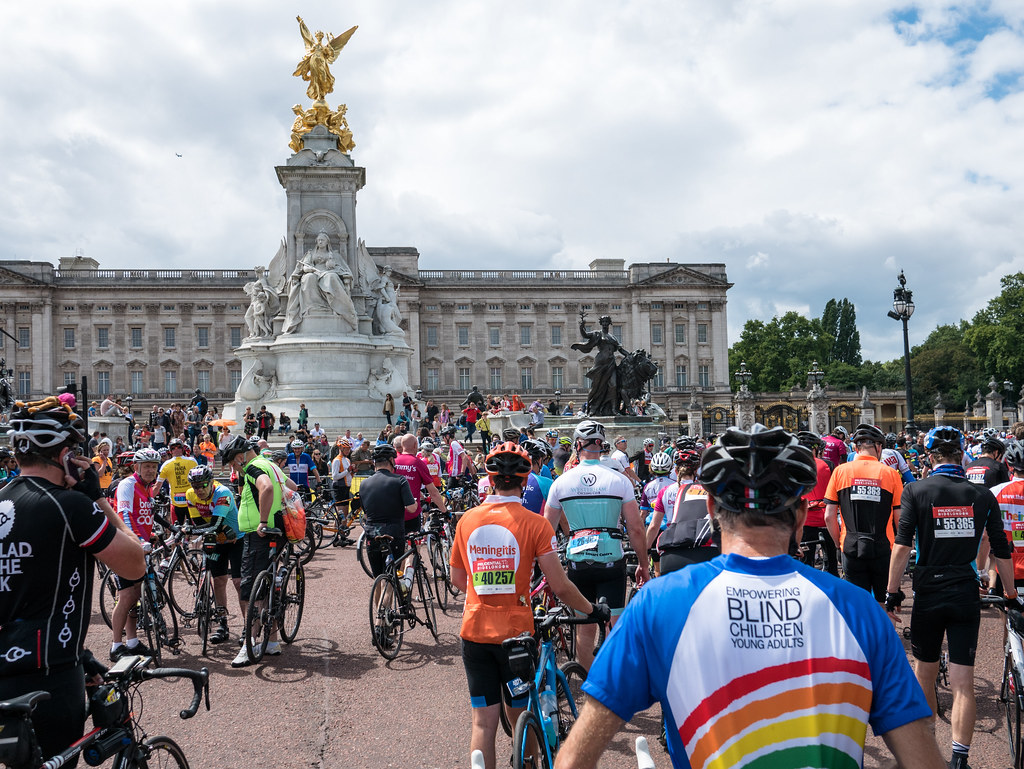 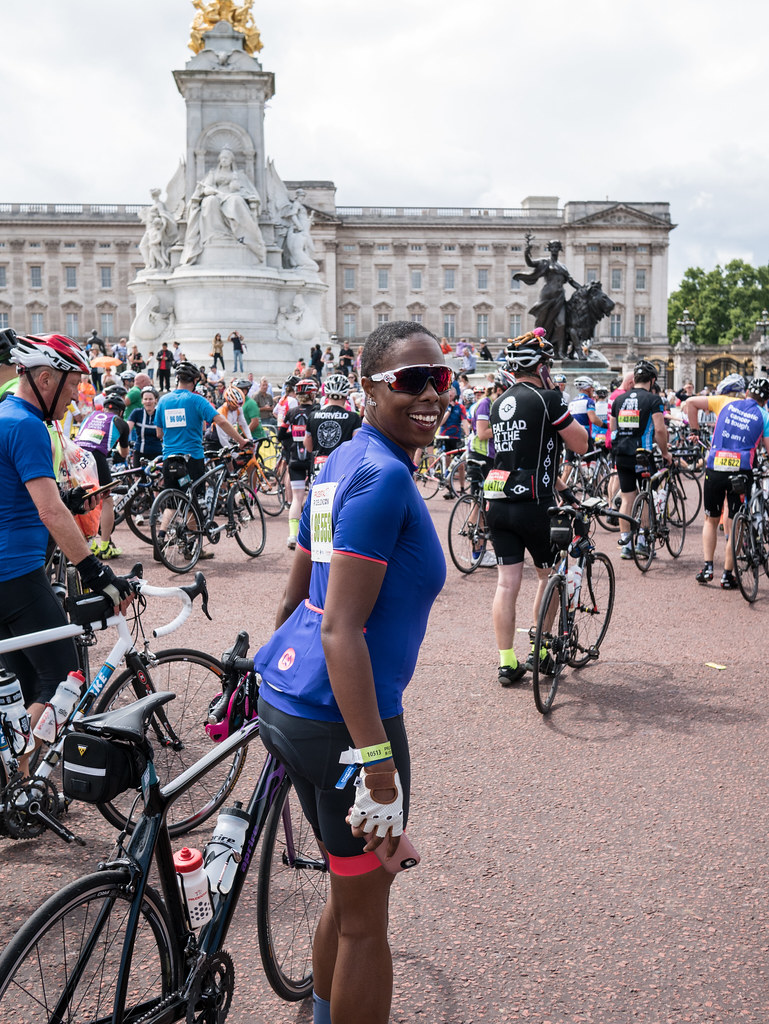 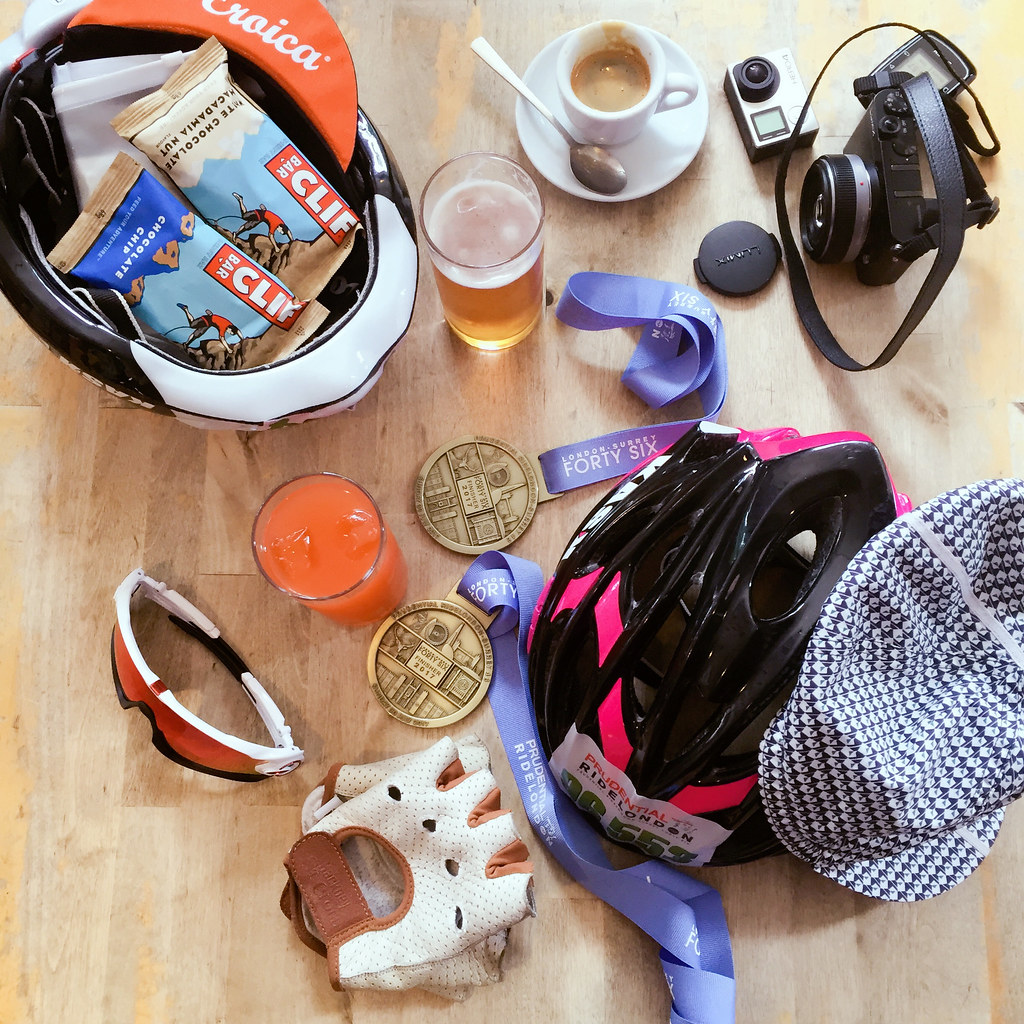 I’d done it. I’d actually done it, and that dark dog of doubt was banished to its kennel for the 3hrs:27mins:36secs I rode those miles in.

I know that doesn’t mean my fears and anxiety will ever go away – perhaps they won’t, but it was wonderful not to let them get the better of me for a change… or stop me from getting on my bike. And maybe if my miles and Reason to Ride has encouraged one more face like mine to go for it next year or whenever they feel it’s right, I’ll continue to celebrate this ride for a long time to come.

From East to West: A Cycle to Melograno…

A few weeks ago The Boy and I were invited[...]