In February, I took on what felt like the biggest challenge of my cycling life: learning how to ride clipless. Doing that on my road bike and getting the hang of it was an awesome feeling… and probably as far as I was willing to go with it at that stage. If you’d asked me back then if doing it on a track bike around a Velodrome was on the agenda, you’d have got a flat “No chance!” from me.

Fast forward 9 months (and with thanks to Love Velo) that’s exactly what I ended up doing.

Love Velo had some big news to shout about – in November they became the official travel partner of British Cycling. Already offering some fantastic holiday packages (which look so bloody appealing to put it mildly), their partnership with BC further highlighted what they were all about: getting more people on bikes and spreading the love they have for riding. To celebrate joining forces, they did something cool by giving a group of everyday riders a session at the National Cycling Centre, on both the Velodrome and the indoor BMX track. The rather special twist to this experience? You’d get coaching throughout your sessions from Rio 2016 medal winning Olympians and Paralympians!

Me and The Boy were two of those everyday riders who were invited to take part. Neither one of us had been on the track (I mean, we’ve been IN a Velodrome, but actually riding on one was a ‘nope’) and it had been a VERY long time since I could claim I’d been on a BMX bike too. There was plenty of excitement building up as we got on the train to Manchester on the Sunday afternoon, but thinking about what Monday morning could hold brought on a little bit of fear. I’d spoken to a few friends who’d done track cycling plenty of times, and after I’d told them I’d ridden fixed gear before (remember when I had that Pashley Clubman?) they all had the same advice… “build up your speed and you’ll be fine.” That was all well and good, but the combination of being fixed, clipped and without breaks on a steep track was giving me serious food for thought… 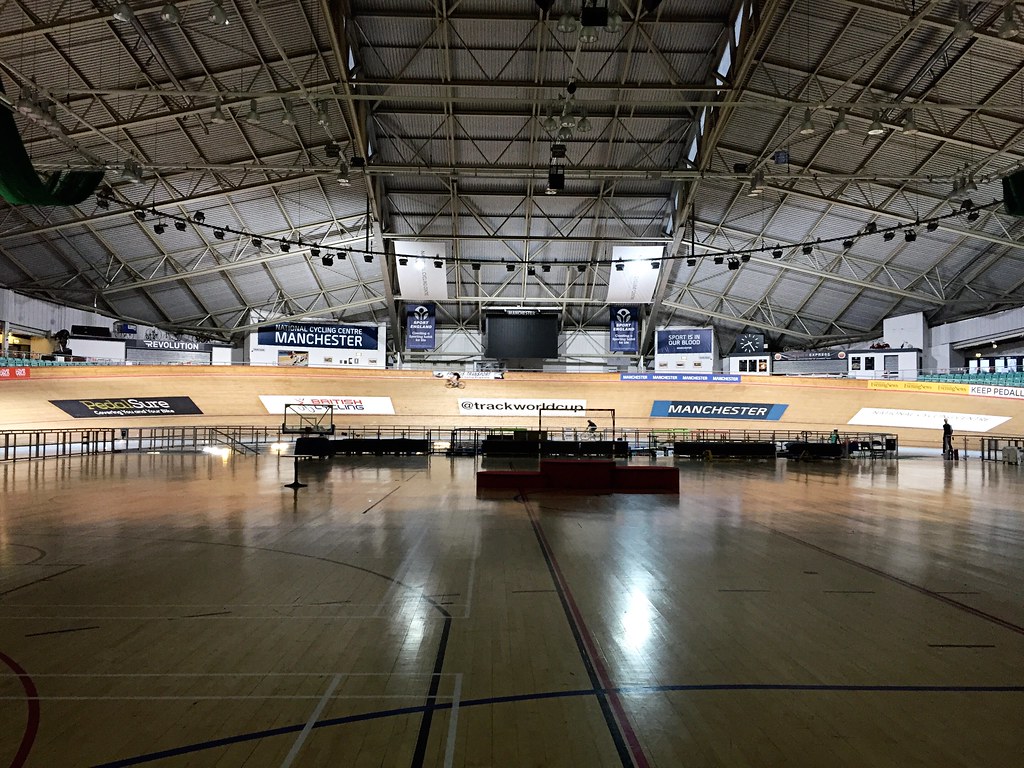 Entering the empty Velodrome at 8am on a Monday morning was a breathtaking feeling. The vastness of the track really hits you: all of the seats looking over it, the history of what’s gone down on that wood, and the champions that have cycled on it hangs in the air. Knowing that I’d be donning my kit and having a go on it was both thrilling and daunting. Then being greeted by members of Team GB who are completely down to earth and super excited FOR YOU going onto the track is something else. To say this put me at ease was an understatement, and the desire to get measured up for the bike and have a go became a lot stronger.

Clipped in and holding onto the railing, coaching began with a run-down of the track and re-familiarising myself with being on a fixed gear bike. Starting to ride around the apron (which is that flat area between the infield and the track), the feeling of being relaxed on the bike kicked in. Its been a while since I’ve done fixed, and although I’ve not forgotten how, this was brand new territory. A few gentle laps of that and feeling more confident, it was time to progress onto the blue of the cote d’azur. As I was going around this, I had Paralympic Gold Medalist Megan Giglia giving me feedback on how I was doing, and encouraging me (after a certain amount of laps and picking up speed) to graduate up to the black and eventually the red line of the track. It was quite surreal having her talking to me as I was riding and telling me that I was improving with each lap! 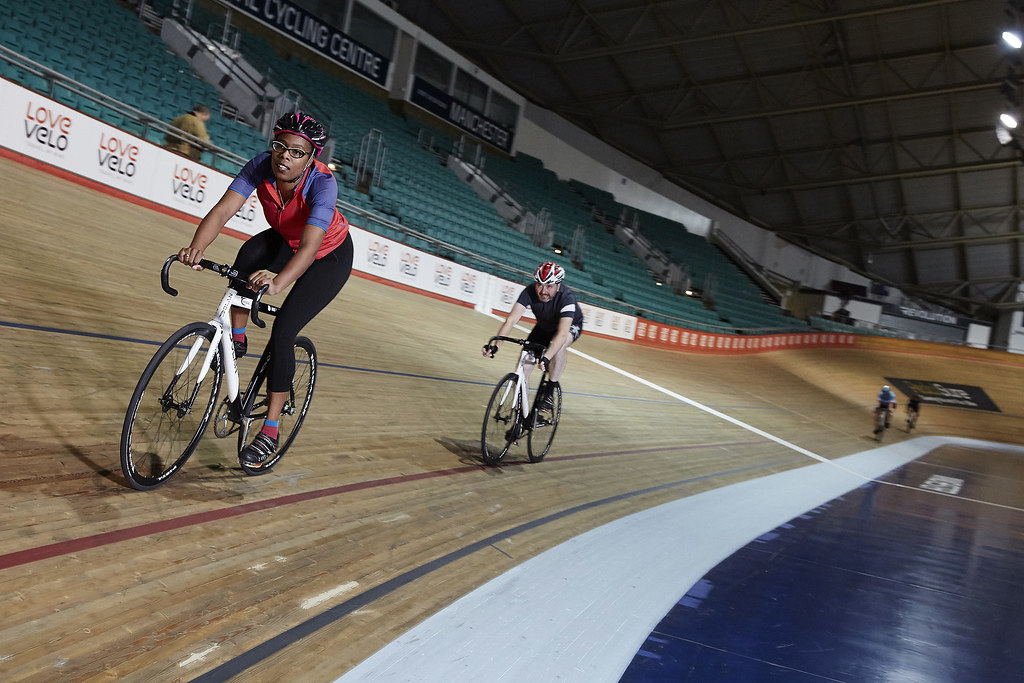 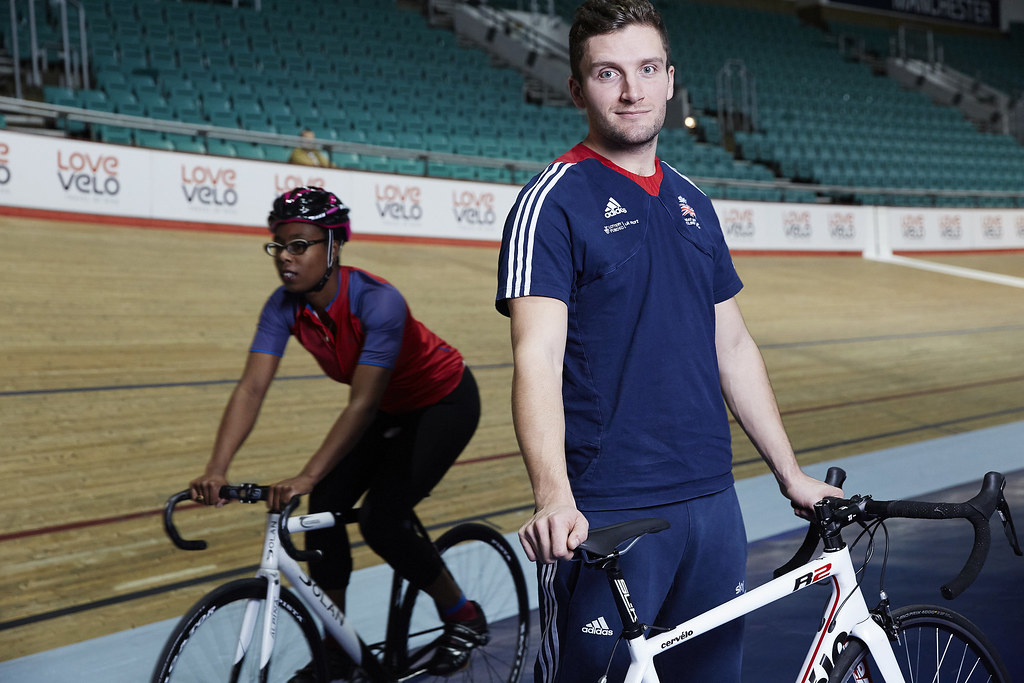 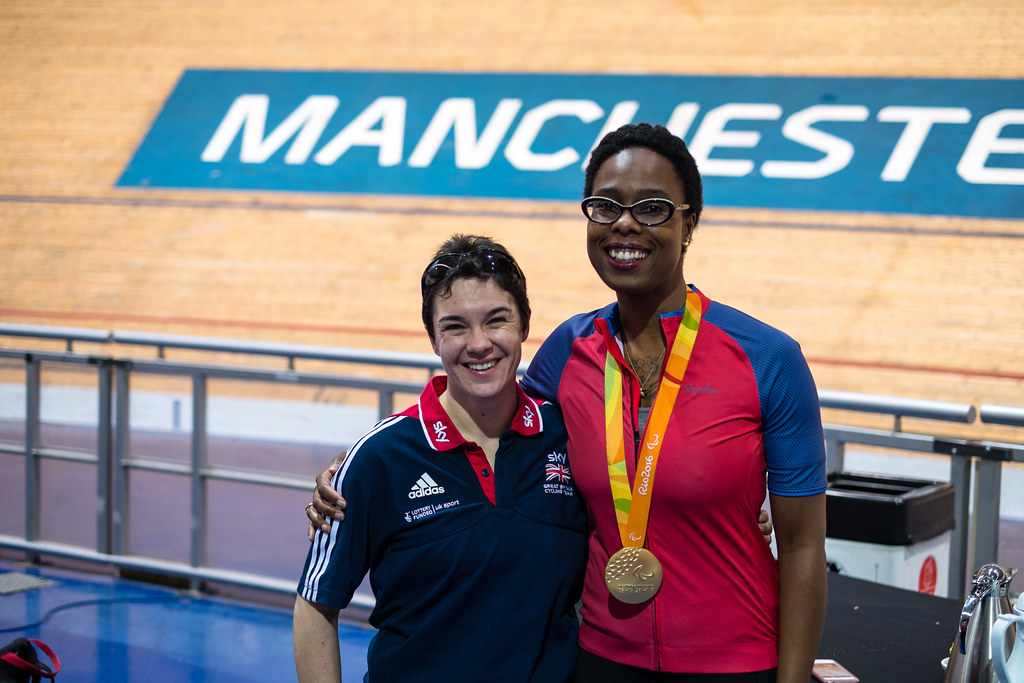 With each revolution, I was taking on more and more speed… faster than I had ever been on a bike before and I was loving it. My legs had gotten into a wonderful cadence and before I knew it, I’d gone beyond the blue line and was riding pretty high on the banks of the track. Coming down in every sense of the phrase was awesome: being on a high like that from cycling – especially a form of cycling that I never thought I would do – was amazing, and talking to Megan about this cemented that feeling even more. Listening to her talking to us all about her journey into cycling for Team GB, and the fact it all started with her having a stroke really struck a chord with me. Having a TIA (mini stroke) in March is constantly on my mind – it’ll never leave me, nor will the fear of it being the thing that could have stopped me from cycling. So hearing Megan talking about her experience being the thing that got her into riding to Paralympic gold winning levels will stick with me for a long time. 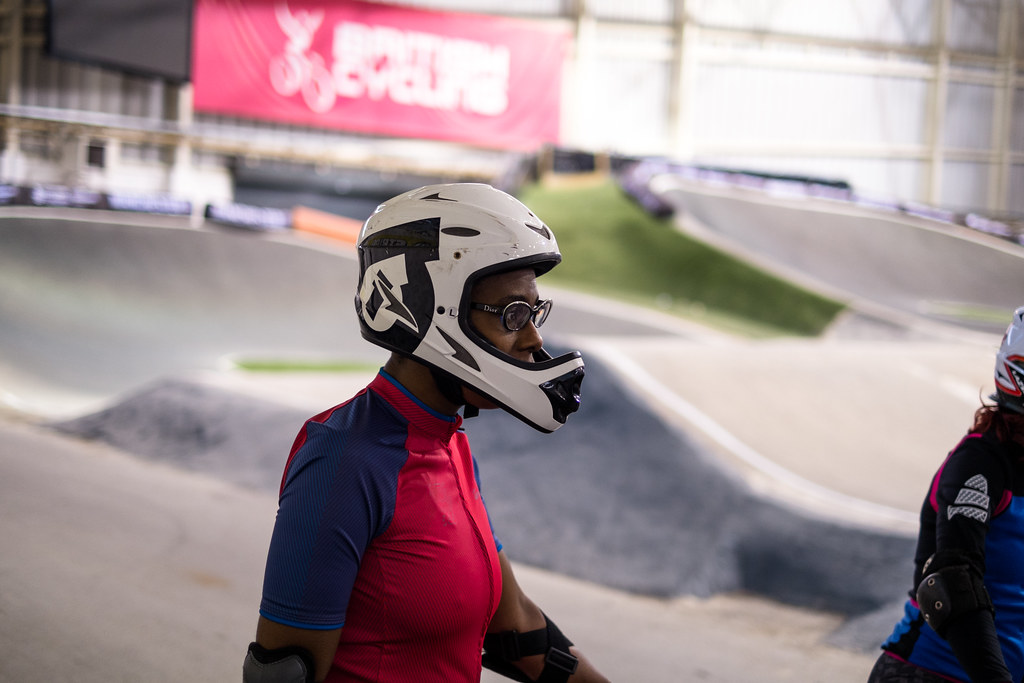 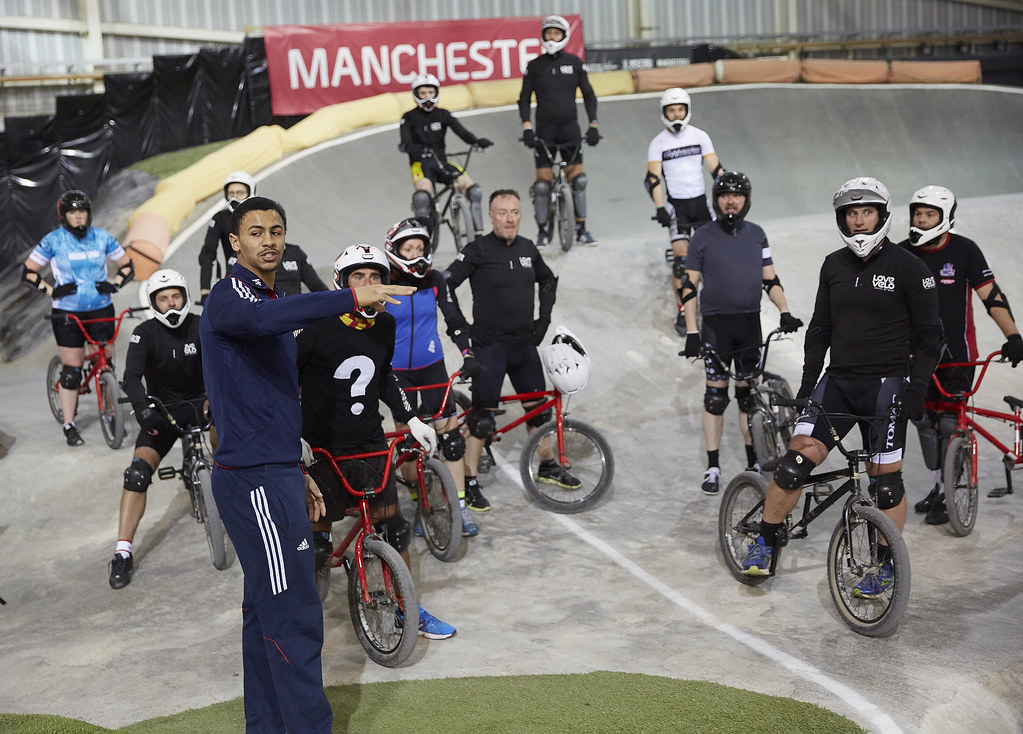 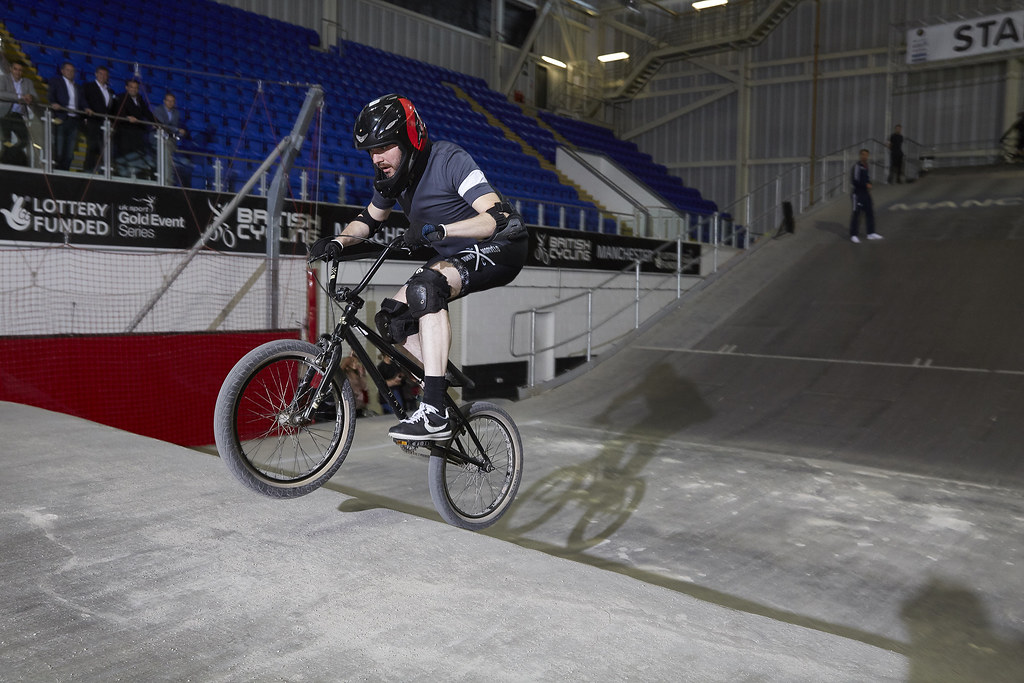 After some much craved carbs and tea, inspirational talks and cradling some medals, it was time to don some new gear and head over to the BMX track. I did mention its been a while since I was on a BMX, right? I’m talking a while ago like “my first proper bike” while ago. THAT LONG. When I got the Raleigh BMX Burner my brother restored for me, I loved riding it, but seeing the indoor track and meeting Quillan Isidore fast made me realise what I was doing was nothing on the scale of this! I’ve wanted to get back on one for a long time, but just never got round to it. I’m going to be honest with you: I was not as good at BMX as I was on the track. Even when I had a one-on-one session with Quillan (on his personal bike may I add, which was LOVELY of him), I wasn’t quite getting into the stride of it as fast as a certain Boy I know. He got into the element of it like a duck to water and it was a joy watching him tearing it up! Although I didn’t quite get the hang of it (possibly best for the health and safety of others I stayed by the sidelines for a bit), that’s not put me off wanting to try it again in different surroundings.

Overall, the day that Love Velo and British Cycling laid on was brilliant – the whole vibe, atmosphere and energy of it was spot on. There wasn’t any pressure that you were not good enough to be riding either track, and being a novice wasn’t an issue (even when you end up photobombing Callum Skinner). The whole point of the sessions was to try it out, enjoy it and the company of the fellow riders around you. Coming away from the day feeling like we wanted to get straight back on track bikes and BMX’s was to me, a sign that Love Velo had done something seriously right. It’s got me thinking about the joy of just going out cycling with friends, and the idea of doing it as a holiday is appealing to me even more… damn Love Velo – you’ve got me looking at your packages and plotting adventures!
Huge thanks to Lee and his team for inviting VCG to take part.
More information on Love Velo can be found on lovevelo.co.uk.

A Week On Wheels…

October is shaping up to be a busy month for[...]

“Sleek and stylish” were the first words that came to[...]