With the dress made and ready for the ride, the remaining thing to sort for my Tweed Run outfit was the hat. When Nisa presented me with my finished garment, she also kindly gave me a small roll of dogtooth tweed that was left over… “this might come in handy later” she said with a knowing smile, and then pointed me in the direction of a milliner she regularly saw in Old Spitalfields Market. Nisa had remembered the there was a matching Pill Box hat in the poster. The last past of the puzzle was falling into place.

I won’t lie – I’d never really been a ‘proper’ hat woman. I always loved the look of beautiful and ornate hats and fascinators, but never really thought they would suit me at all. Before this year, the only types you’d find in my wardrobe were beanies & bobbles that would only be deployed in the winter (or when in between hairstyles), so getting a fancy hat professionally made was something I never thought I would do. As soon as I’d arrived at Bellapacella, I realised that was about to change.. 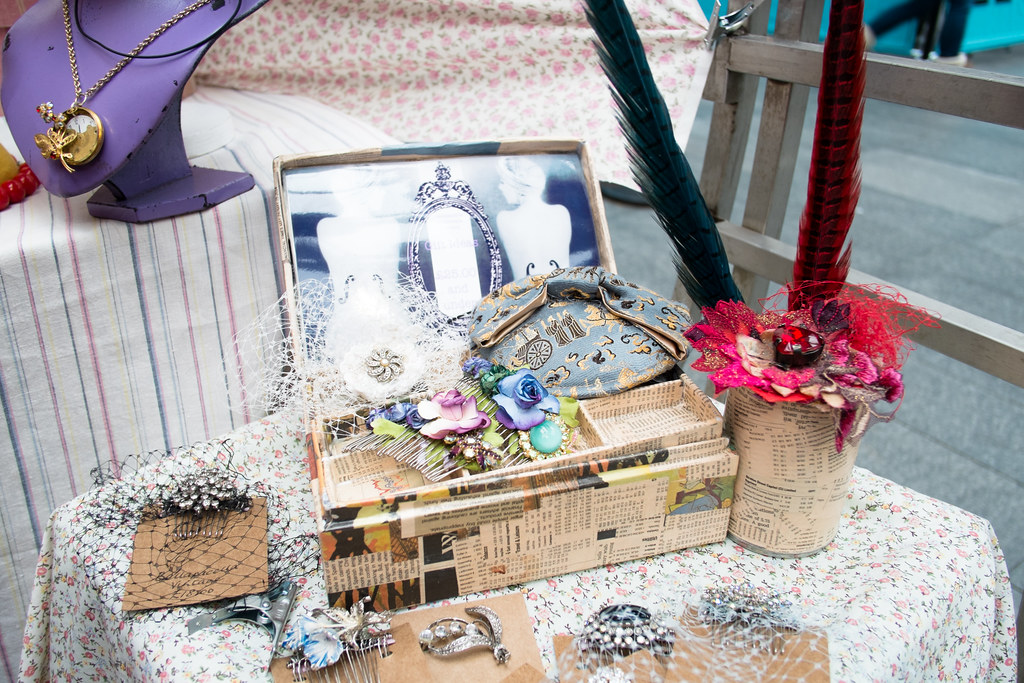 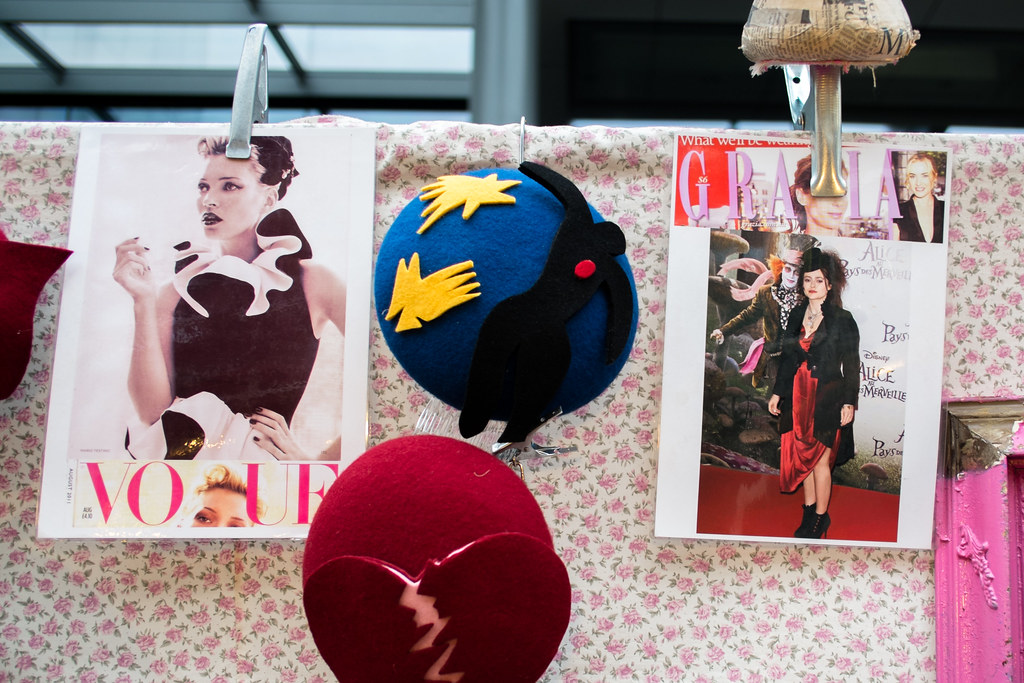 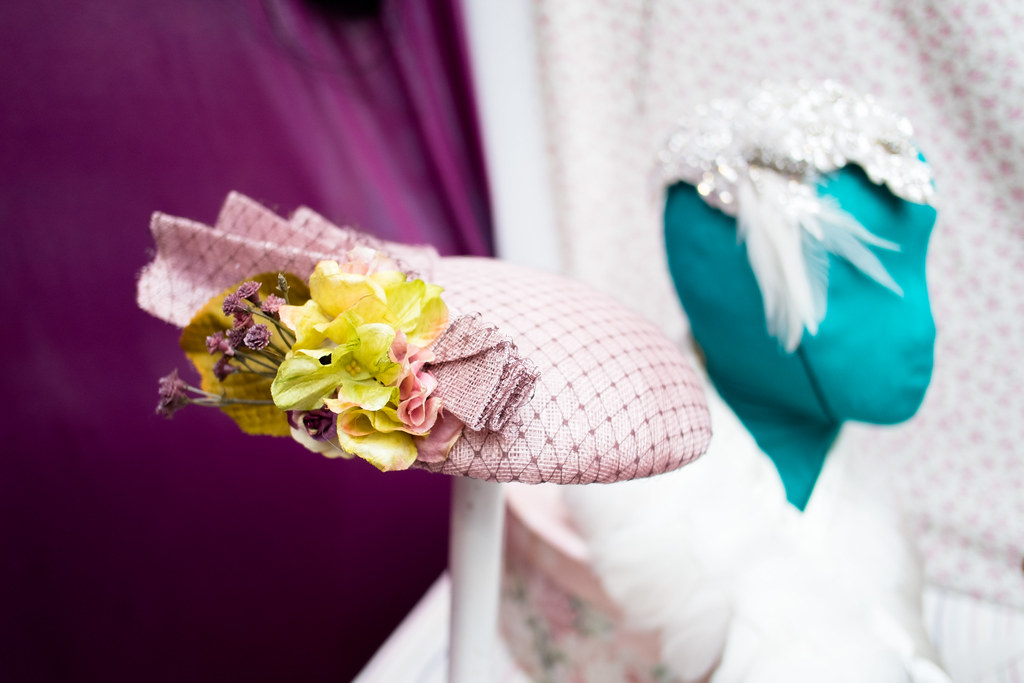 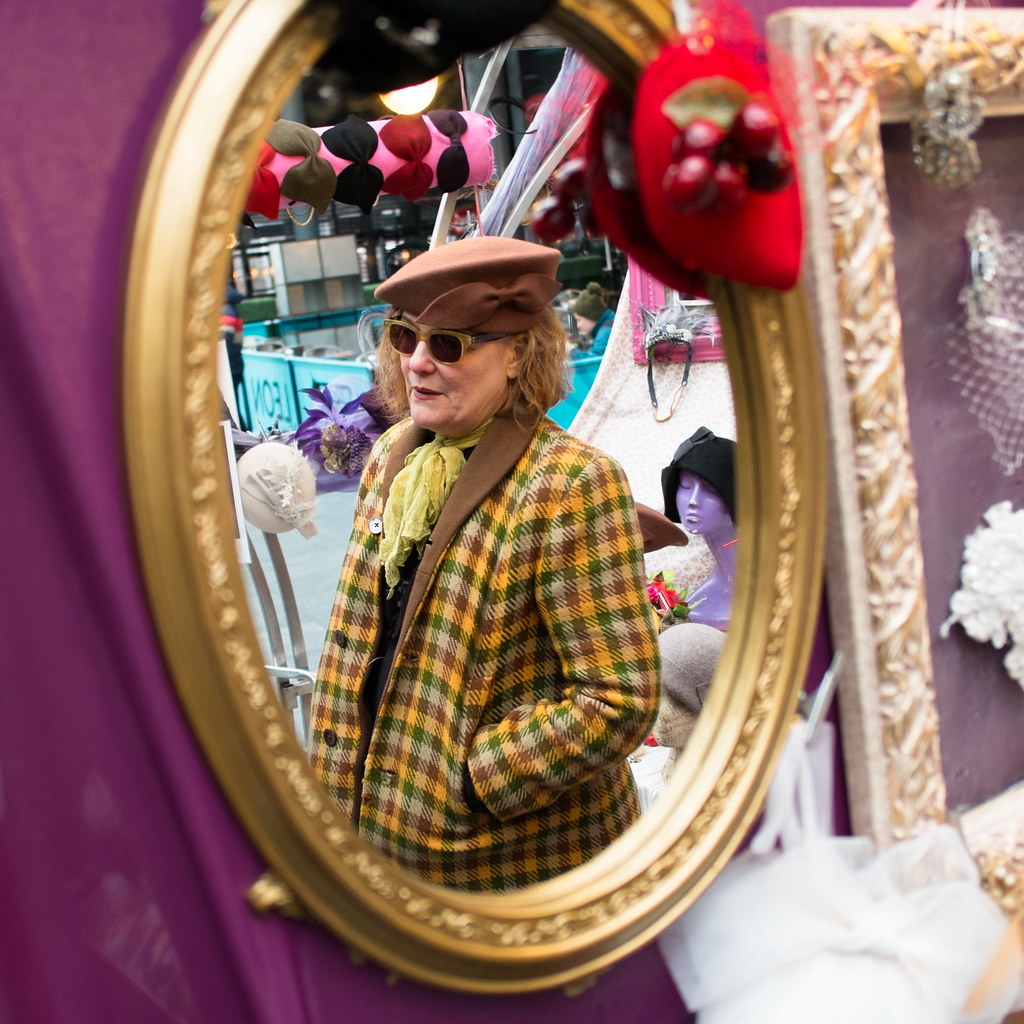 When I met Jeanne Pacella and had a look through her creations I was taken by her and her work in an instant. Hailing from Chicago, and with an incredibly eclectic style, Jeanne was a total breath of fresh air. My ideas of hat design being an old skool and deeply traditional / intimidating scene were smashed! She’s been trading in Old Spitalfields for 10 years, and has a background in fashion, working in jewellery and corsetry designs before making hats.
Her stall was filled with a multitude of vintage inspired hats ranging from 1920’s style cloches, to cocktail and 1940’s pillbox hats. On top of that there were hair clips, combs, jewellery and handbags too – all designed and made by Jeanne, and all incredibly beautiful. Her designs recreate the romantic beauty of those decades past, and most of Bellapacella’s pieces are styled around recycled costume jewellery, and all made in England. This all made me realise I had to get Jeanne to make my Tweed Run hat for me. Add to all that, seeing Helena Bonham Carter was a fan of her designs & wore them, I was even more excited at the prospect of owning a one off Bellapacella piece!
Jeanne was more than happy to create a bespoke hat for me… huzzah! I had fun trying on the different styles of hat, eventually finding one that suited my face. After agreeing what ‘flare’ should go on the hat, I gave her my roll of tweed and returned in a couple of weeks to collect my piece of millinery magic… 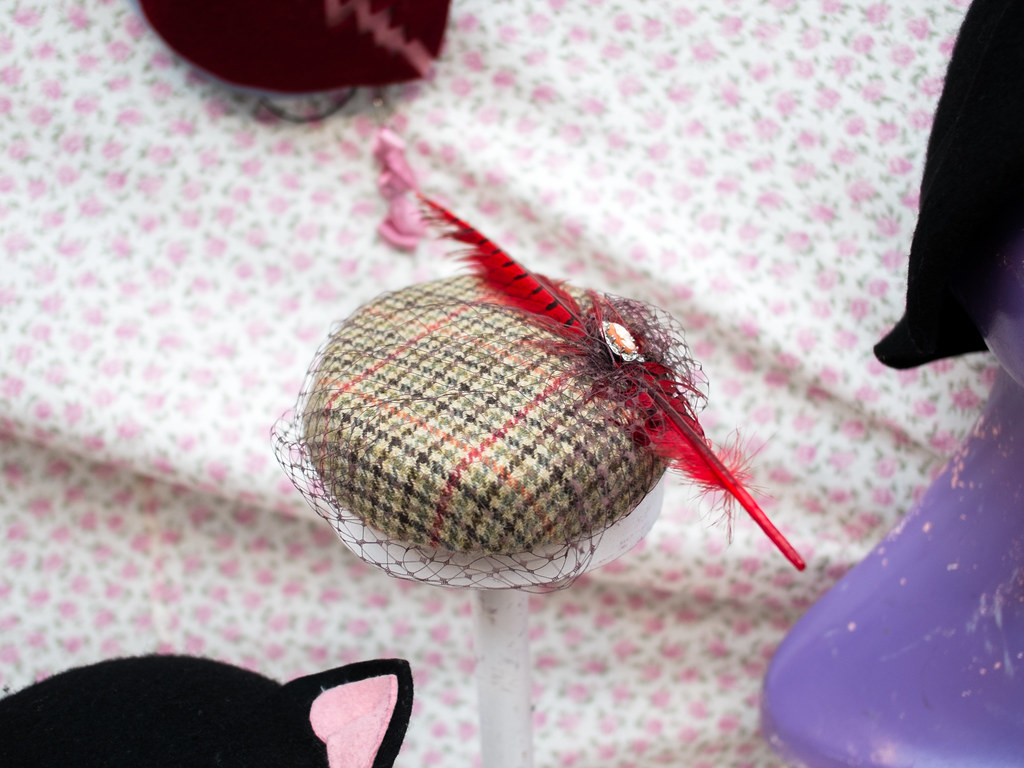 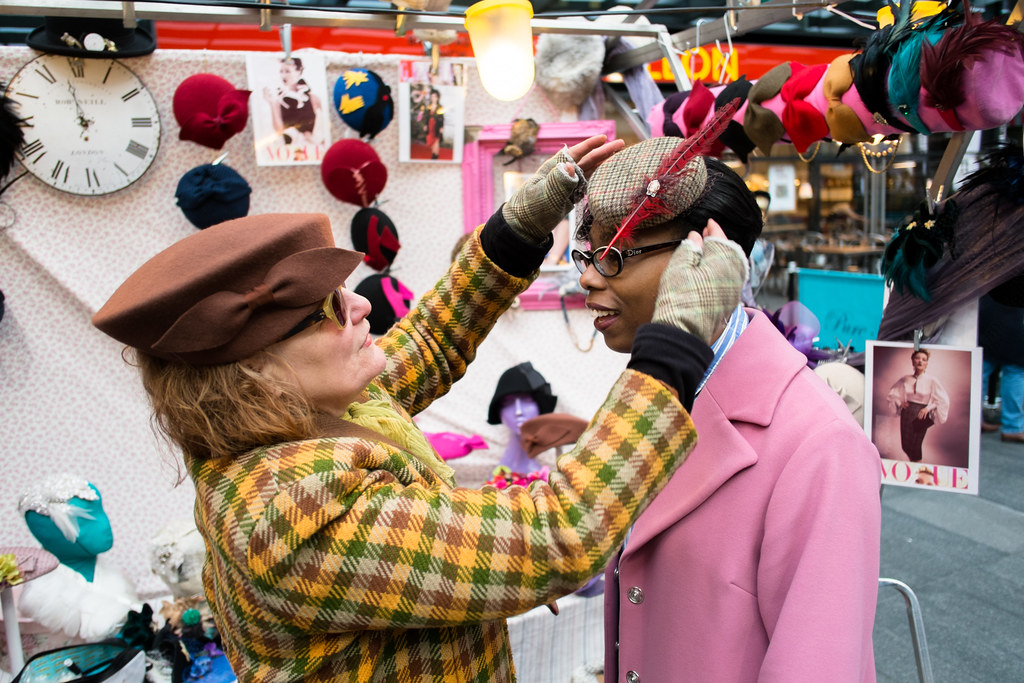 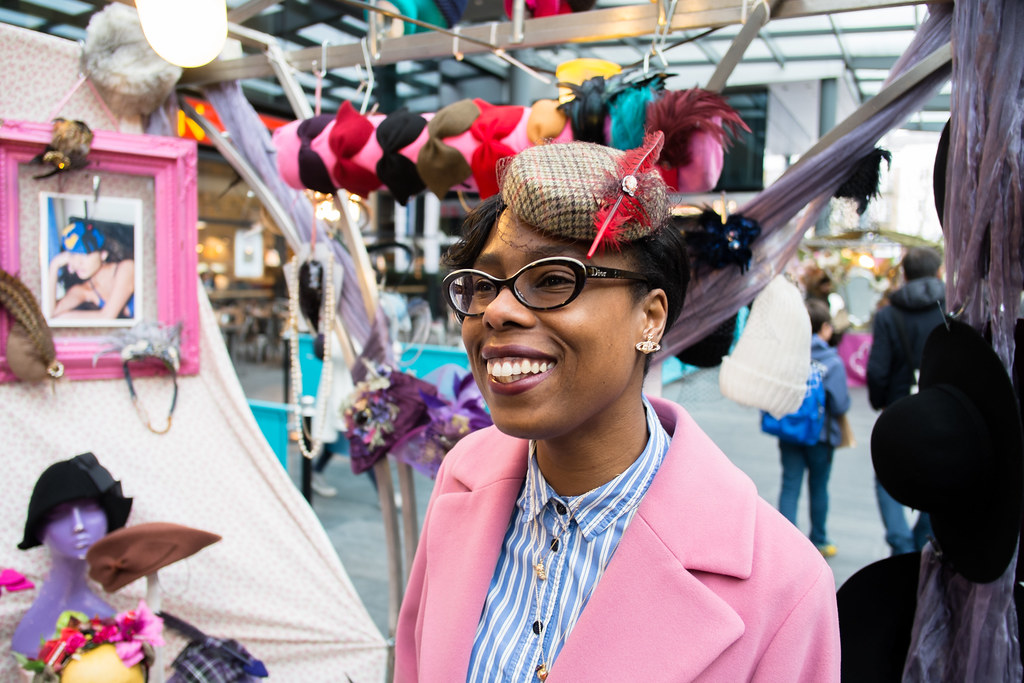 I absolutely love this hat! Fashioned out of the same dogtooth tweed as the dress, and finished off with a Pheasant feather, netting and a diamante Cameo brooch… it’s the perfect finishing piece to recreating the outfit. Jeanne is fantastic, and should I ever need a hat again for a rather special occasion, I know exactly where to go. 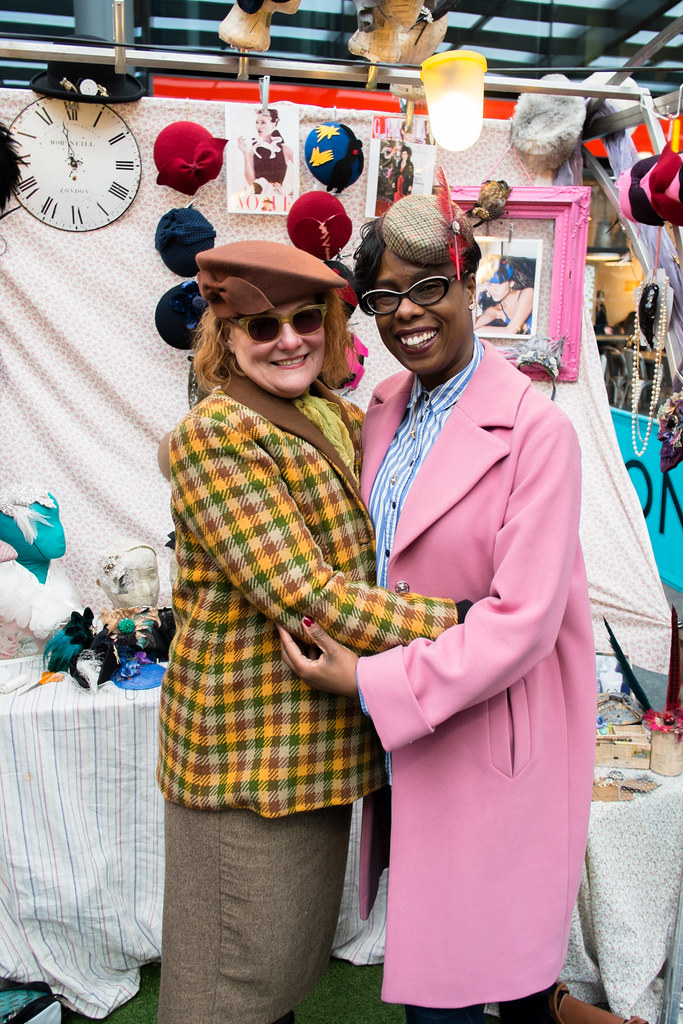 All will finally be revealed together on Saturday 18th April on the Tweed Run… better not get any food on my dress at the Pol Roger brunch before the ride! Huge thanks to Jeanne Pacella for making this wonderful hat. Bellapacella is at Old Spitalfields every Sunday, and can be contacted via her website.
And of course, thanks as always to Ian James for his photography for these two blog posts… the full “Tweed Run Outfit” set of photos can be viewed here.

I went on a “Cycle-Date” from East London to Richmond[...]

Sunday 6th May saw the return of the London Tweed[...]

Last weekend saw the 1st CoffeeCycleSaturday Ride: saddle up on[...]